Story - Indian opener and KKR captain Gautam Gambhir has declared that he is ready to lead India in test matches and turn around team’s fortunes in all formats of the game. Speaking exclusively on ‘Aamne Samne’ with News 24’s editor in chief Anurradha Prasad, Gambhir said, “I am ready to captain India in test matches. As a youngster playing for India is the biggest honour for you and when you have played for India, leading the team is the biggest honour. We have lost two big series after the World cup and we have reached a stage where team should be brought in front and individuals should be pushed in the background. What is more important is that the team should win. I have realized that team is more important than captain”.

Gambhir went on to add that the team’s performance in ODIs and T-20 can’t be improved if it continues to play poorly in test matches. He said, “I would like to captain the test team because I believe if your test team is doing well, one day and T20 teams will automatically do well, they will take care of themselves. When we started doing badly in test matches, our ODI and T20 performance also started to go down”.

In what is being seen as the strongest ever challenge to Dhoni, Gambhir who has been in sublime form recently said performance must be considered while choosing a captain. “Nobody is born with captaincy or vice captaincy. If you want to bring a change, it’s time to stop worshipping individuals, keep them in the background. Select your best 11 players and then choose a captain from that 11. Successful team makes a successful captain, successful captain does not make a successful team”, he said.

Gambhir who has just won the IPL for Kolkata Knight Riders revealed that KKR had a similar culture of individual worship but he has been able to change it in the last 2 years. He told Anurradha Prasad, “in the first three years, a lot of glamour and individual worship was associated with KKR. When I took over, my motive was that people start judging KKR with it’s on-field performance rather than what they do off field. This is the difference that has come in last 2 years”.

When asked if he is in favour of split captaincy in the Indian team, Gambhir said, “1 captain or 3 captains, team should win”.

Gambhir also advised Dhoni not to comment on abilities of individual players and should rather see if they are giving their best on the field. When asked to comment on Dhoni’s earlier statement that senior players of the side were slow fielders, Gambhir said, “whether it’s me or Sehwag or anyone else, he should see whether we are giving 100% or not rather than commenting they are slow fielders, that becomes too individual. You can only give your 100% and can’t control what others think or say about you. This is his thinking, I can’t change anyone’s thinking, I can only give my 100%”.

Gambhir disclosed that he is always insecure about his place in the team but that’s exactly the reason behind his success. “I am insecure, if I don’t score in a few matches, I feel I will get dropped but that’s ok as it helps me to not get complacent. Everyone should be insecure, you can’t take your place in the side for granted. You shouldn’t think this is my place and no one can take it from me. If you are not insecure, you will not give your 100%”.

Reflecting on India’s disastrous tours of England and Australia Gambhir said, “In tests we didn’t play well and the opposition player better than us. But, individuals shouldn’t be blamed for defeats like they shouldn’t be worshipped for wins. There was a lot of talk that certain senior players should retire, it was all rubbish. The whole team loses and the whole team wins”.

The IPL winning captain also expressed his love for five day cricket saying, “we should all promote test cricket. Test cricket makes great players, that’s where you can score 200-300 runs and break records. All youngsters should first look to play tests rather than T-20 (IPL). Test matches are most important for me, it is most satisfying to score runs in tests”.

Defending KKR’s over the top celebration on winning the IPL, Gambhir said, “Kolkata deserves this IPL trophy for the way people of Kolkata have supported KKR. The team had seen a lot of lows in the first three years so they deserved to celebrate this victory. Even team owners deserved to show excitement and celebrate. I was warned that I will not get support as I was replacing someone but I have got a lot of love”.

The KKR captain also appealed to the Mumbai cricket association to revoke Shahrukh’s Wankhede ban saying, “Shahrukh has apologized and showed a lot of maturity and large heartedness. The kind of person he is, he meets opposition players with more love than his own players. He is so passionate and an inspiration to all. It will be odd if Shahrukh is not in Wankhede next year. Since Sharukh has apologized, MCA should reciprocate. This should end now”.

Gambhir also dismissed rumours that Shahrukh interferes in team matters. He said, “in the first three years there was a lot of rumour that Shahrukh interferes a lot in the team but what I have seen in the last two years is that he doesn’t interfere at all. When I took over as KKR captain, he told me KKR is your team, make it or ruin it. He gave me all the freedom. Sometimes he doesn’t even come for the team meetings. When he does, he only tries to motivate players. He doesn’t even talk cricket with me”.

When asked if he has something to say to the Delhi Daredevils team which didn’t retain him and let him go in 2010, Gambhir replied, “whatever happens, happens for good. Two seasons ago, Delhi team owners didn’t retain me, if it hadn’t happened, I wouldn’t have played such good cricket and got so much love. Delhi team owners didn’t say in three years what Shahrukh said to me at the very beginning – that this is your team, make it or ruin it. I got so much freedom which wasn’t there in DD. I got so much love every time I have gone out to bat or captain KKR. I am not a Delhi boy now, I am a Kolkata boy”.

Reacting to recent demands from parliamentarians that IPL should be banned, Gambhir advised the MPs to mind their own business. He said, It has become easy in our country to blame IPL and BCCI for everything. When Parliamentarians say IPL should be banned etc, I feel there are bigger issues in our country and they should look to solve them and concentrate there. IPL has done some very good things for cricket….it has given us such a large pool of players”.

Commenting on the recent controversies surrounding the IPL, Gambhir said, “they are all individual off field controversies and IPL/BCCI shouldn’t be blamed for this. IPL can’t watch players 24 hours, it’s up to individuals if they want to play honestly or do other things”. 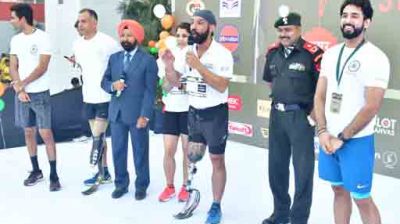 Soldierathon : Tribute to our BraveHeart