Home Business Kiphire district has the potential to become the Centre for International Trade... 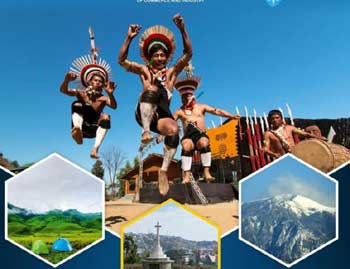 The tourism department is developing trekking paths and adventure sports around Mount Saramati, which is the highest peak in Nagaland in Kiphire district 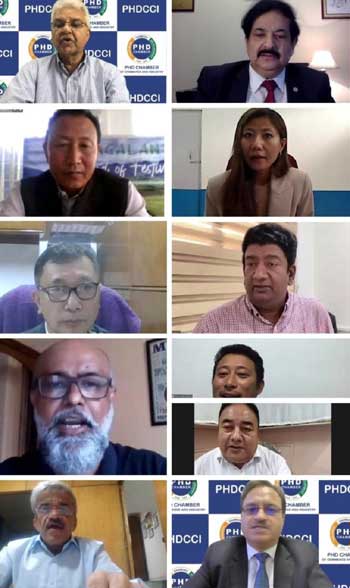 about the lesser-known destinations across the country, PHD Chamber of Commerce and Industry (PHDCCI) has launched its Border Tourism Webinar Series. The 6th webinar in the series held on 27 August 2021 focused on the Kiphire district for the promotion of Border Tourism in Nagaland.

Addressing the webinar, Mr. Vinod Zutshi (Retd. IAS), Former Secretary – Ministry of Tourism, Government of India, mentioned that the scope of Border Tourism is immense if promoted and marketed well as it gives an opportunity to see the neighboring countries from our own motherland.

Talking about the potential of Border Tourism in Nagaland, Mr. Zutshi said that Nagaland is the land for inhabitant diversity of tribes with its unique culture and heritage. There are lots of villages in the border areas of Nagaland and especially Kiphire district which gives an overview of the Indo-Myanmar border. The state tourism department can look at promoting Tribal Tourism as majority of travellers arrive during the Hornbill Festival.

He further said that the tourism board along with the district administrator needs to work towards enhancement of road and air connectivity, upgradation of tourist infrastructure and ease of access in terms of permissions. He also emphasized that there is a need to bust the misconception that Nagaland is an unsafe destination to travel to with lot of digital and social media campaigns.

While talking about the geographical strengths of Nagaland, Mr. T. Yanpvuthung Kikon (NCS), Joint Secretary – Tourism, Government of Nagaland, mentioned that festivals, nature, adventure and culture are the main aspects of tourism promotion in the state. He apprised that the state is providing incentive for tribal festivals and capitalizing on festivals to boost tourism. The district has abundant varieties of natural attractions and it can be a potential hotspot for adventure, eco, cultural and rural tourism.

He also informed that the tourism department is developing trekking paths and adventure sports around Mount Saramati, which is the highest peak in Nagaland in Kiphire district. Considering the strategic location of the district, Kiphire has the potential to become the centre for international trade and tourism.

Mr. Nehjamang Simte, Deputy Secretary, Ministry of Development of North Eastern Region, Government of India, highlighted that their Ministry has a North East Special Infrastructure Development Scheme (NESIDS) sanctioned by the Government of India to focus on projects relating to infrastructure creation concerning water supply, power and connectivity and thereby enhancing tourism. He informed that as on date total 9 projects are ongoing in the tourism sector in Nagaland.

He also talked about the various skill development programs which are helping to generate local employment in the district. He emphasized the need to improve last-mile connectivity, digital marketing, hotel and road infrastructure.

Mr. Rama Kamaraju, Senior Consultant, NITI Aayog, informed that Kiphire district has performed extremely well over the last two years which has shown transformation in all parameters of the Aspirational Districts Programme (ADP). He emphasized that the potential of tourism is high in Nagaland especially for domestic and inbound tourists. He mentioned that NITI Aayog is confident that Kiphire district will be one of the most visited tourist destinations in the near future.

While giving an overview on the tourist attractions of Kiphire district, Ms. Ane Khieya (NCS), Extra Assistant Commissioner – Kiphire District, Government of Nagaland, shared that the district has immense potential for Border Tourism. However, major challenges exist in terms of road infrastructure, supporting services such as private hotels, economic backwardness, lack of tourism education amongst the locals, underdevelopment of cross-border trade. Capitalizing on the enormous Border Tourism potential in Kiphire, through the concerted and collaborative effort of all stakeholders i.e. the government, private industry and local communities will go a long way in contributing to the development of the border villages and the district as a whole.

Mr. Nirmalya Choudhury, Chairman – North East States Chapter, Indian Association of Tour Operators, talked about the need for good road connectivity, accommodation and internet connectivity which will promote tourism in the state. He mentioned that training of local youth should be facilitated as it will help them in becoming tourist guides thereby generating employment opportunities.

Mr. A David Solo, President, Nagaland Tourism Association, emphasized the need for promoting Village Tourism in the state as real Nagaland lies in the villages. He mentioned that the Government has to keep in mind the sentiments of local people in mind while formulating the policies and it should be aligned with existing structure.

Highlighting the challenges of the hospitality sector in Nagaland, Mr. Seyiekhrielie Natso, Secretary, Nagaland Hotel and Restaurant Association, mentioned that hotels and restaurants are main stakeholders of tourism but economically it is not viable to have hotels in remote areas. Tourism in Nagaland is at a nascent stage and there is a need to develop road connectivity, homestays to facilitate tourism.

In his welcome address, Mr. Pradeep Multani, Senior Vice President, PHDCCI, mentioned that improving socio-economic status of border districts, especially aspirational districts, are one of the priorities of the Government of India. These districts, often rich in recreational, cultural and natural resources provide great potential for the development of Border Tourism.

Talking about the Focus State – Nagaland, he said that the state has been extremely successful in promoting the Hornbill Festival, which attracts Indian and foreign tourists alike. Among all other industries that the central and state governments are trying to promote, Sustainable Tourism has the upper hand, for it is the only way for progress and eco-friendliness to walk hand-in-hand.

Mr. Rajan Sehgal, Co-Chairman – Tourism Committee, PHDCCI, said that over the years, Nagaland has been through a lot of ups and downs; but this has been a blessing in disguise for it has preserved the beauty, natural wealth and the overall sanity of the place. Today, as India’s North-East is making rapid economic progress and carving out a corridor into South-East Asia, Nagaland is standing on the threshold of an economic boom.