Kapil Sibal chaired the meeting of the Indian National Commission for cooperation with UNESCO.

Union Minister of Human Resource Development Shri Kapil Sibal chaired the meeting of the Indian National Commission for cooperation with UNESCO, here today. The Commission deliberated on India’s future strategy for strengthening the networking and leadership role in UNESCO priority areas. The members also expressed their great appreciation for the establishment of the Mahatma Gandhi Institute of Education for Peace and Sustainable Development (MGIEP) in India that will promote independent and collaborative research within and between the areas of peace, human rights, moral sciences, ethics, ecology, environment and other professional fields with the objective of facilitating global efforts towards building a new world order based on the principles of social justice, equity, good governance and sustainability. Shri Sibal underlined that the Institute will showcase the Indian philosophy of both peace and sustainable development that are deeply engrained into India’s traditions, culture and thoughts. Dr. Karan Singh, the designated member of India on the Executive Committee of UNESCO stressed on protecting and maintaining the cultural diversity including intangible heritage. He also highlighted the celebrations for Gurudev Rabindranath Tagore’s 150th Anniversary and also highlighted the commemorative programmes planned with UNESCO for 150th Anniversary of Swami Vivekanand and 100th Anniversary of Amrita Shergil. He also stressed on value based education and the role of universities in UNESCO programmes and collaborating with the developing countries. The discussions in the Commission also focused on India’s achievements and future strategy for education for all, technical and vocational education and training, India’s alliance in Literacy with UNESCO, use of ICT in education, open education resources, linguistic diversity, preservation of tangible, intangible heritage, India’s leadership role in Oceanographic and Earth Sciences, freedom of press, empowering community through communication, development of tribal, classical and contemporary art as well as preservation and sharing of historical archival documents. The Indian National Commission for UNESCO comprises of five different Sub-Commissions, namely, Education, Culture, Communications, Social Sciences and Natural Sciences in tune with the UNESCO priority areas. The Commission has eminent persons from these fields as members. India has been actively engaged with UNESCO by assisting the UNESCO programmes and activities through annual contribution of about Rs.10 crore towards its regular budget. Extra-budgetary support and capacity building programmes are also taken up by India like contribution of US $ 1 lakh to World Heritage Committee for specific projects; special contribution of US $ 5 lakh to international programme for development of communication etc. International Oceanographic Commission of UNESCO has assigned India the role of development of international training school for operational Oceanography on which India will be spending Rs.150 crore. 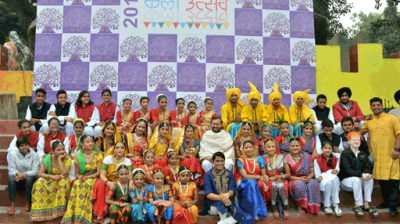