Home Religion & Society Astrology Kaal Bhairavashtami is on 16 November of the fifth incarnation of Lord... 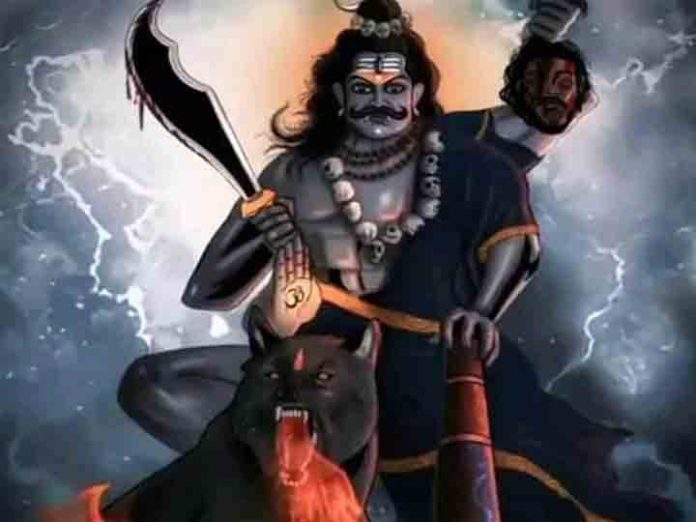 Kaal Bhairavashtami is on 16 November of the fifth incarnation of Lord Shiva, Kaal Bhairav.

According to the scriptures, the incarnation of Lord Kaal Bhairav ​​took place on the Ashtami date of Margashirsha Krishna Paksha. On this day in the mid-day, they were originated from the part of Lord Shiva Shankar, who is considered to be the fifth incarnation of Shiva.

This year this date is falling on 16th November. Kaal Bhairav, the Rudra form of Mahadev, is considered to be the deity of Tantra, therefore, first of all, Kaal Bhairav ​​is worshiped to complete the practice of Tantra-Mantra without any problems. Kalabhairava protects the devotees from enemies and troubles. There are definitely awakened temples of Bhairav ​​near all the Shaktipeeths. Without her worship, the worship of Mother Goddess is considered incomplete.

Glory of Lord Bhairav
Bhairav ​​is very important among Hindu deities. He is also known as Kotwal of Kashi. The name of his power is ‘Bhairavi Girija’ who is the desired maiden of his worshippers. They have two forms, the first is Batuk Bhairav ​​who is famous as a gentleman who gives fearlessness to the devotees, while Kaal Bhairav ​​is a fierce punisher who controls the criminal tendencies. It is also believed that the three letters of the word Bhairav ​​contain the power of Brahma, Vishnu and Mahesh. Bhairav ​​is considered a ganas of Shiva and a follower of Parvati. He himself takes the burden of protection for whoever worships him with a sincere heart and fulfills all the wishes of his devotees. Also, by worshiping Bhairavji, problems like ghosts, negativity, upper obstacles etc. are also removed.

How to please Kaal Bhairav
By worshiping Kaal Bhairavji on this day, a person gets freedom from fear. Not only this, worshiping them gives freedom from both planetary obstacles and enemy obstacles. To get their compassion, a mustard oil lamp should be lit in front of the idol of Lord Bhairav ​​from the day of Kalashtami. On this day, one should wake up early in the morning and take a bath and wear clean clothes. The lamp of black sesame, urad and mustard oil should be offered to Lord Kaal Bhairav, along with chanting of mantras and worshiping him duly, he is pleased and gets his grace.

On this day, according to the devotion, offer red or white sandalwood ‘Om Namah Shivaya’ to the Shivling. While offering Bilbpatra, face east or north. By worshiping in this way, Kaal Bhairav ​​will be pleased and fulfill your wishes.
Lord Kalabhairav’s vehicle is a dog, so to get the blessings of Bhairav, feed the black dog with sweet bread or jaggery pudding on this day.
Worshiping Lord Kaal Bhairav ​​removes ghosts, ghosts and upper obstacles. To get rid of all negative energies, chant Om Kalabhairavai Namah and recite Kalabhairavashtak on this day.
To get the blessings of Bhairav, burn fragrant incense sticks of rose, sandalwood and Google in any Bhairav ​​temple on this day. Offer five or seven lemon garlands to Bhairav ​​ji. Donate warm clothes to the poor and destitute.
Kalashtami fast is considered very fruitful. By keeping a fast on this day, worshiping Kaal Bhairav ​​with full rituals, all the troubles of a person are eradicated. Time turns away from him. PLC/GT