The 2nd Session of the India – Azerbaijan Inter-Governmental Commission on Trade (IGC), Economic, Scientific and Technological Cooperation was held in Baku, was co-chaired by Mr.Jyotiraditya M. Scindia, Minister of State for Commerce & Industry, Government of India and Mr.Huseyngulu Baghirov, Minister of Ecology and Natural Resources of Republic of Azerbaijan. Shri Scindia stressed necessity of establishing the International North-South transport corridor (INSTC) to improve the connectivity problems between the two nations and called for joint efforts towards identifying issues and impediments in the smooth functioning of the Corridor. The Minister added that the development would lead to saving in transportation costs and time. He also advocated early finalization of a Bilateral Investment Promotion and Protection Agreement (BIPPA) and the Double Taxation Avoidance Agreement (DTAA) between the two countries to encourage investment flows and elevate investor’s confidence. A Protocol signed at the end of the meeting identified key areas of cooperation such as pharmaceuticals, energy, transport, agriculture and IT sectors and also suggested steps to overcome the existing barriers. It also recommended specific measures like finalisation and implementation of agreements to give a legal basis and provide comfort to the economic and financial relationship. Shri Scindia emphasized the need to establish closer institutional linkages between investment promotion agencies in Azerbaijan and India in order to promote two way investment which is currently is at a modest level. He specifically enumerated the sectors, such as, Petroleum, Information Technology, Food Processing, Pharmaceuticals, as having the maximum potential. During his stay in Baku, Shri Scindia called on the President of the Republic of Azerbaijan Mr. Ilham Heydaroglu Aliyev and the two leaders discussed the overall bilateral relations. Both leaders felt that the current economic engagements are not enough to justify the potential that exists between the two countries. The President of Azerbaijan said that his country attaches significant importance to bilateral particularly economic relationship with India, and hoped that within next year or two; there will be substantial increase in bilateral trade and investment. President Aliyev lauded India’s achievement in the IT sector and expressed his desire to use Indian expertise in this area. The Azeri President also commended India’s achievements in the Space science and identified this as another hi-tech sector for cooperation. He invited Indian companies and skilled workers for civil construction work being undertaken in Azerbaijan to improve its infrastructure. MoS, in his response, spoke about several complementaries between the two economies and needs to exploit the same for the mutual benefit. He also conveyed to the Azeri President, India’s keen desire to participate in the exploration and development of Oil and Gas field in Azerbaijan and usage of BTC pipeline for evacuation of oil to meet India’s energy security needs. While emphasizing the need for more people to people contact, the MoS brought to the notice of the Azeri President issues related to Visas for the Indian businesses. MoS Commerce &Industry also met Mr. Shahin Mustafayev, Minister of Economic Development of the Republic of Azerbaijan and exchanged views on issues for promotion of economic relations between the two countries. Mr. Mustafayev informed the Indian Minister about the steps taken by Azeri Government to step up the growth of its economy and, its efforts to reduce dependence on Petroleum thereby making it broader based which has already started showing the positive results. 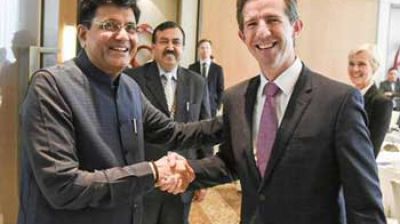