JNUSU and APMCC organized a seminar in New Delhi, to commemorate 68th year of signing of the instrument of accession of erstwhile J&K with Union of India

INVC NEWS New Delhi, All Parties Migrants Coordination Committee (APMCC) and JNUSU today organized a seminar on “ Radicalisation in Kashmir – A threat to secularism in India” at JNU Campus. Prominent speakers were Lt. Gen. (Retd.) Ata Hasnain, former military Secretary GOI, Sh. D.C.Nath, former Director CBI, Sh. A.K.Ohri, DGP (Retd.),Awadesh Kumar, Sr. Journalist,  and Sh. Sandeep Raj Koul, social activist. Welcoming the panelists, APMCC threw light on the systematic radicalization of unsocial elements and distortion of History in the state of J&K. Sh. Ravinder Pandita Head of APMCC- Delhi, presented vote of thanks. JNUSU and APMCC distributes sweets to the participants and audience on the occasion to commemorate 68th. Year of signing of instrument of accession to India by erstwhile Maharaja Hari Singh, ruler of J&K. Speaking on the occasion the speakers demanded a white paper be issued by State and Central government on the action taken to rehabilitate and bring back Kashmiri Hindus back, who had left their hearth and homes , in the wake of militancy in 1990. The speakers laid emphasis on the unity to fight radicalization which has engulfed the whole society throughout globe.

APMCC is one of the frontline organizations of Kashmiri hindus working for the rehabilitation and reclamation of destroyed and abandoned temples throughout the valley and has come into prominence by organizing infamous Kaunsar Nag Yatra, Porbander Gujarat indefinite fast by its chairman, Jammu 10 day long fast, Banning of Haider movie protest and other protests in support of their  demands. 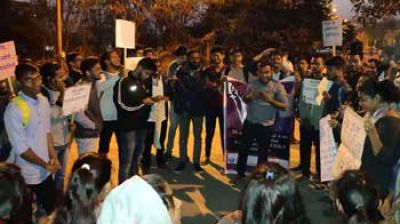 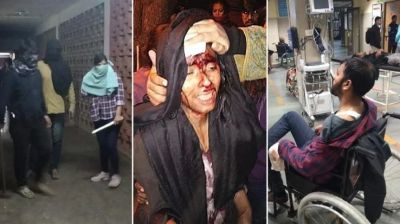 APMCC stages protest and Candle march to pay homage to...