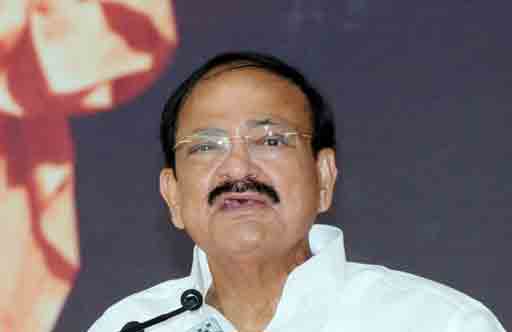 The Vice President of India, Shri. M. Venkaiah Naidu has called on the government and the civil society organizations to get together and take up the task of preserving our tangible and intangible cultural heritage.

He emphasized that both the government and civil society groups must also work to generate awareness among the larger public about the need to preserve the architectural marvels of India. ‘General public must desist from defacing and misusing these precious buildings and must make every effort to prevent the further degeneration of these jewels’, he said.

Shri. Naidu was addressing the gathering after inaugurating and dedicating to the nation ‘Shyamoli’, the heritage house of Rabindranath Tagore.

Shyamoli is an experimental mud-house built at Santiniketan in 1935. The house has been recently renovated by the Archaeological Survey of India as a deposit work and is a property of Visva-Bharati at present.

The Vice President said that to Bengal, Tagore has been, and still remains to this day, an altogether exceptional literary figure, towering over all others.

‘For India, especially for Bengal, he is a great institution and for the world, he was the voice, the representative of India’s spiritual heritage. He is indeed India’s pride and glory’, he added.

Shri Naidu said that Santiniketan embodied Rabindranath Tagore’s vision of a place of learning that is unencumbered by religious and regional barriers. He added that Santiniketan was affectionately moulded by Tagore on the principles of humanism, internationalism and a sustainable development.

The Vice President also applauded Tagore’s effort to expand the school’s relationship with the neighbouring villages of the Santhal tribal community in an attempt to help with rural reconstruction and to sensitize the students about the challenges of rural life.

Quoting Mahatma Gandhi who said that “I do not want my house to be walled in on all sides and my windows to be stuffed. I want the culture of all lands to be blown about my house as freely as possible. But I refuse to be blown off my feet by any”, Shri Naidu said that Santiniketan had successfully adapted to the changing times yet managed to preserve its essence.

The Vice President said that India was home to a treasure trove of cultural heritage, both tangible and intangible. ‘Our heritage is our identity; it is what makes us unique and exceptional. India always held an enviable position in the world because of its rich and extremely diverse cultural heritage’ he added.

Shri. Naidu cautioned that we simply could not let our architectural gems lie buried under the weight of neglect and inertia. Citing that Tagore was an ardent believer in the value of protecting, nurturing and propagating our rich cultural heritage, Shri. Naidu said that it is our duty and responsibility to protect every single monument and every single art form and pass it on to posterity so that they grow up in complete comprehension of India’s glorious history.

Speaking of India’s rich vernacular architecture, the Vice president said that these architectural marvels would serve as models of sustainable housing to be emulated, for future architects and builders and therefore must be zealously restored where necessary and preserved. He applauded the Archaeological Survey of India for the great restoration work of Shyamali carried out by them.

He opined that the dedication of this heritage house to the nation and making its rich history available to everyone is the best tribute that can be paid to India’s immortal bard who always believed in the democratization of knowledge and wisdom. He expressed hope that ‘Shyamali’ would prove to be an abode for students and other knowledge seekers alike.