The Vice President, Shri M. Venkaiah Naidu today emphasized the need to preserve our rich cultural and linguistic heritage and urged everyone to make efforts, individually and collectively, for this.

Congratulating the editors, authors and publishers for dedicating the book to renowned singer Shri S P Balasubrahmanyam, the Vice President called for more such initiatives to promote our rich cultural heritage. He also lauded the Vanguri Foundation for organizing Telugu language conferences during the past 27 years.

Noting that emergence of internet and digital technologies provides us with new opportunities for preservation and development of our languages, the Vice President called for making effective use of these technologies. “The day our language is forgotten, our culture will also disappear,” he said, adding that our ancient literature should be brought closer to the youth. The Vice President urged the organizations working for Telugu language to take up the responsibility of making the rich literary wealth of Telugu available to everyone. Stressing the need to make the traditional vocabulary accessible to everyone, Shri Naidu said that it is necessary to use existing words effectively and create new Telugu words in line with changing trends.

The event was attended by representatives of the Telugu diaspora from all over the world, Telugu language enthusiasts and Telugu writers, including Sri Vanguri Chitten Raju, founder of the Vanguri Foundation of America, and Sri Vamsiramaraju, founder of the Vamsi Arts Theater.

The ultimate goal of technology is to bring happiness in...

Differently-abled persons can excel in any field if an enabling... 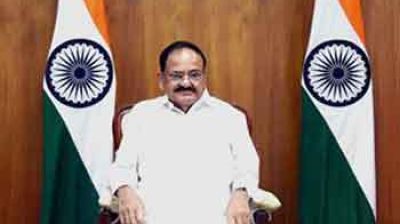 We cannot rest on our past laurels : Vice President

We cannot act recklessly and invite another wave : Vice...