It is necessary to provide equal and better opportunities to the minorities through educational, economic and social upliftment - Nitish Kumar

INVC,, Delhi,, Bihar Chief Minister, Shri Nitish Kumar apprehended that the Central Govt. is going to present a bill in Parliament to prevent communal violence, the preparation for which has been going on since long. Shri Kumar demanded that before presenting this bill in the Parliament, a through discussion with the State govt’s. over its draft is warranted. He indicated that it proposes for promulgations of Article 355 of the constitution in a limited area during “internal disturbance”. Such provision is not at all desirable, he asserted. It leads to unnecessary interference in State govt’s jurisdiction. Shri Kumar emphasized that if in any situation that state govt. is found to be incapable of carrying out its duties, necessary action could be taken under the exhisting constitutional provisions. Shri Kumar further feared that because of the provisions of this Bill, impression may be created among the people at large that the majority community is always responsible for communal incidents. He cautioned that this opinion may cause sharp reactions among the majority communities and ultimately go against the minorities and will adversely affected the basic objective of the Bill. Shri Nitish Kumar further objected to the notion promoted in the Bill that only State falter in taking administrative decisions and the centre has the role to set it right. He asserted that he is not at all hesitant to denounce this notion that only State govts make mistakes. Centre, according to him, has also faltered many a times, a glaring example he cited was of the appointment of previous Central Vigilance Commissioner. However, Bihar Chief Minister, Shri Nitish Kumar due to some unavoidable reasons could not attend the today’s “National Integration Council” meeting in Delhi and in his place Bihar Water Resources Minister, Shri Vijay Kr. Chaudhary represented him in the meeting Bihar Chief Minister’s speech further mentioned that communal and caste violence has been brought under full control in Bihar during last six years by establishing rule of law and good governance. No major communal violence has occurred during this period. by holding speedy trials from 2006 till June’ 2011, a total of 62,576 criminals have been convicted which included 133 death sentences and 10,535 life imprisonments, which has led to remarkable improvement of general law and order & effective control over crime. The state government has also systematically pursued and ensured speedy trial and disposal of pending cases in various courts relating to mass murders committed in the decade of 1990 and the early years of present decade resulting in award of punishment in many cases. Bihar Chief Minister further mentioned that his govt. had constituted a judicial enquiry commission with a high court retired Judge as its chairman in Feb 06 for enquiring Bhagalpur riot occurred in 1989. It inquired into 93 such cases in which riots victims had either sold their immovable properties out of fear of riots. It was restored 2 to 18 persons because of State govt’s initiatives. However, it is a first instance in India that due to State govt’s initiative, the original owners were restored their lost properties and because of that a sence of satisfaction and security has been restored among the victims. State govt. also reopened the earlier Bhagalpur riot’s closed criminal cases for reinvestigation. As many as 29 such closed criminal cases were reinvestigated and even charge-sheeted criminals in 23 cases. Cases in which the investigating and supervising officers had wrongfully submitted final reports to close the cases were re-examined. Responsibility has been fixed to start disciplinary actions against the guilty officers in such cases. Shri Kumar further mentioned that the State govt. is paying a monthly pension of Rs. 2500/- from Sept. 2007 to the kin of 370 dead or traceless persons of 1989 Bhagalpur riots. However, earlier only one time exgratia assistance was paid to the riot victims. However, this initiative has acted like balm on the old wounds. Bihar Chief Minister further said that it is necessary to provide equal and better opportunities to the minorities through educational, economic and social upliftment. Under “Mukhyamantri Alpsankhayak Vidhyarthi Protsahan Yojna” incentive of Rs. 10,000 provided to those minority students who are passing 10th class with first division. In the first year (2007) 2627, 5688 in 2008, 12969 in 2009 and 20225 in 2010 students benefited from this scheme. Moreover, the divoced Muslim women in the state are paid Rs. 10,000 as per one time grant for self-employment, so that they may become self-reliant. In 2007-08, 737 Muslim women, in 2008- 09, 931 and in 2009-10 altogether 2538 Muslim women were benefited under this scheme. Now it is being linked to self-help groups.  Moreover, to enhance the representation of minorities in police to remove the sense of insecurity among them, for the first time, under the “Constable Recruitment Coaching Scheme” minority candidates were trained for written and physical examinations and many from the community got benefited. With regards to the MSDP scheme of Union Minority Affairs Ministry being implemented in the minority concentration districts, Shri Kumar questioned its effectiveness. Earlier proposal for construction of class rooms, toilets and provisions of drinking water facilities in madarsas were approved under this scheme for some districts of Bihar but later on similar proposals of other districts were rejected. He alleged that the scheme has totally deviated from its objectives by implementing it as a routine area development scheme. He said that the Central govt’s minorities development strategies are faulty as it was reported by independent institutions like “Centre for Equity Studies". At last, shri Kumar mentioned that in the last six years caste and communal harmony was maintained in Bihar due to State govt’s unflinching resolve and inclusive progress. In the NIA meeting, the State was represented by Bihar’s Water Resources Minister, Shri Vijay Kr. Chaudhary. Shri Aamir Subhani, Bihar, Home Secretary also participated in the meeting. 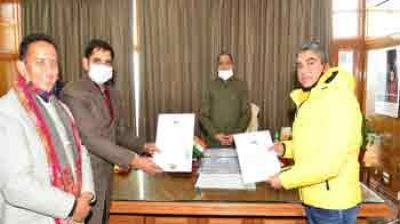