It is a favorable beginning for the people Madhya Pradesh

INVC NEWS New Delhi, In the august presence of  Smt Sumitra Mahajan, Speaker, Lok Sabha and Minister of Railways Shri Suresh Prabhakar Prabhu, Extension of Train No 19653 / 19654 Ratlam Ajmer Express up to Indore via newly constructed Broad Gauge Q-Track was flagged off through Video Conferencing from Rail Bhavan, New Delhi today. The dignitaries attended the programme at Rail Bhavan end include Members of Parliament and Members of Legislative Assembly of the local area. Chairman, Railway Board, Shri A. K. Mital, Member Traffic Railway Board Shri Mohd Jamshed and other Railway Board Members and senior officials were also be present on the occasion. Speaking on the occasion  Speaker, Loksabha Smt Sumitra Mahajan, said that, “Today’s train extension shall be beneficial to everyone in Madhya Pradesh area. Under the leadership of Shri Suresh Prabhu most of the demands regarding Rail connectivity in Indore region have already been fulfilled and the area does not have any more demands. Indore Dahod track work is in progress. Railway connectivity with the Industrial township of Pithampur has been accomplished and container services has also started. Mhow station development is ensured. Army has given land for it. Madhya Pradesh won't lag behind in the process of growth. I appreciate the leadership of Shri Suresh Prabhu ji under which the difficult work of making tunnel in Jammu Kashmir area was completed.. Speaking on the occasion Minister of Railways Shri Suresh Prabhakar Prabhu said that “It is evident that people want Railway connectivity in their areas. Today, on the occasion of Hindu New Year and Gudi Padwa, it is a favorable beginning for the people of Indore and Madhya Pradesh. Madhya Pradesh is an important State for us. People of Madhya Pradesh have always given representation for better Rail Connectivity. Allocation to Madhya Pradesh has been raised to Rs. 2871 Crore in the last 2 years from Rs. 632 Crore in the previous year which is  increase of 354%. In 2017-18 Rail Budget allocation, it is further raised to 750% more. Funds are no more impediment in the process of Growth. Gauge conversion, doubling and tripling projects have gathered pace in Madhya Pradesh. Projects of 56,547 Crores  are being implemented. 7 new surveys are conducted and have been sanctioned. Gauge conversion from Chittorgarh, Ratlam, Indore work has been completed. Indian Railways and Madhya Pradesh Government will soon form Joint Venture Company. State Government has given assent. Next Year on Gudi Padwa, it shall be done.” 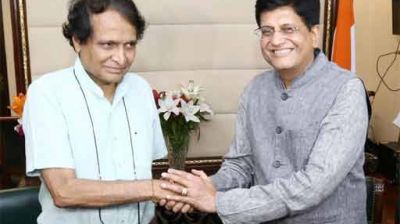 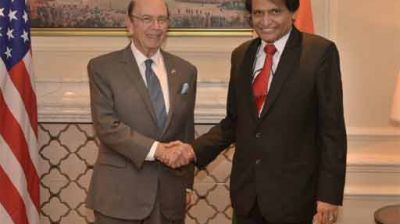 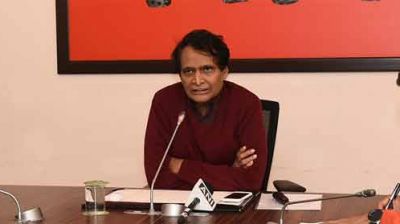 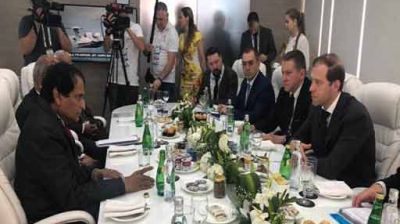