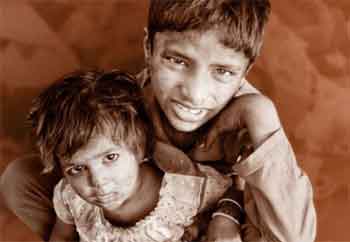 Addressing the Occasion, Dr. Mansukh Mandaviya said, “India’s strategic fight against polio is a success story of India’s public health policy against vaccine preventable diseases. We need to continue to be vigilant and ensure that every child under 5 years of age must get polio drops.” 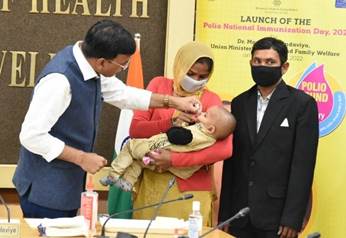 “Under the leadership of our Hon’ble Prime Minister, Universal Immunization Programme is focusing to protect children from more diseases than ever before and has introduced several new vaccines like Pneumococcal Conjugate Vaccine (PCV), Rotavirus vaccine, and Measles-Rubella vaccine (MR) in the recent past. Further, to provide additional protection to our children, the Government of India has also introduced the injectable Inactivated Polio Vaccine into its routine immunization program. While we are making efforts to protect our children from more and more diseases, it is important that all vaccines under the programme reach every child of our country.”, Dr. Mandaviya further added.

Stressing on the importance of observing National Immunisation Day, the Union Health Minister HFM said, “The aim of Swastha Bharath can only be achieved if our children are healthy. The objective of Mission Indradhanush or Polio Vaccination Drive is to protect our children against such deadly diseases. Since our neighbouring countries are still not polio free, we should remain vigil and continue the vaccination program. Over 15 crore children of age less than 5 years will be vaccinated in the coming months. Door-to-door Vaccination campaigns through robust micro-planning will be done to ensure that no one is left. I congratulate all the Health Care Workers, Stakeholders like WHO, UNICEF, Rotary club and NGOs for making this immunization programme a Lok Bhagidari Andolan as envisioned by our Hon’ble Prime Minister. I request all families to come forward to get their children Vaccinated.”

The Union Health Secretary highlighted the achievements and the way forward to implement the National Immunisation Programme. He said, “Though India is polio free, it is still our responsibility to remain vigil. Transit teams deployed at all the states to ensure immunization. And, continuous pulse polio implementation at borders are happening as our neighbouring countries are still reporting Polio Cases.”

The Polio National Immunization Day 2022 (NID) will be organized across the country on Sunday, 27th February 2022. India conducts one nationwide NID and two Sub-National Immunization Day (SNIDs) for polio every year to maintain population immunity against wild poliovirus and to sustain its polio free status. During the Polio NID, Over 15 crore children will be covered across all 36 States and UTs in 735 districts. During the drive, polio drops will be provided to children through 7 lakh booths across the country. Approximately 23.6 crore houses will be visited by nearly 24 lakh volunteers and 1.5 lakh supervisors. The State of Meghalaya has already conducted the drive in the state on 24th January 2022 while Mizoram plans to conduct the drive on 1st March 2022 due to local reasons. The election bound states of Uttar Pradesh and Manipur plan to organize the Polio NID on 20th March and 24th March 2022 respectively.

The booth activities will be followed by house-to-house surveillance (mop-up rounds) over the next two to five days to identify and vaccinate children who missed getting vaccinated at the booths. Vaccination teams have also been deployed at bus terminals, railway stations, airports and ferry crossings to vaccinate children in transit to ensure no child misses the life-saving dose.

India has been free of polio for more than a decade, with the last case of wild poliovirus reported on 13th January 2011. However, India continues to remain vigilant to prevent re-entry of the poliovirus into the country from neighboring countries of Afghanistan and Pakistan, where wild poliovirus continues to cause the disease.

It is also ensured that all measures for safety during pandemic are observed by following all COVID Appropriate Behaviors (CAB) such as preventing overcrowding at booths, maintaining physical distance, wearing masks, washing hands and administering polio drops in well ventilated-settings.