Home Other Investigation News India’s rise to power is not to scare anyone but for the... 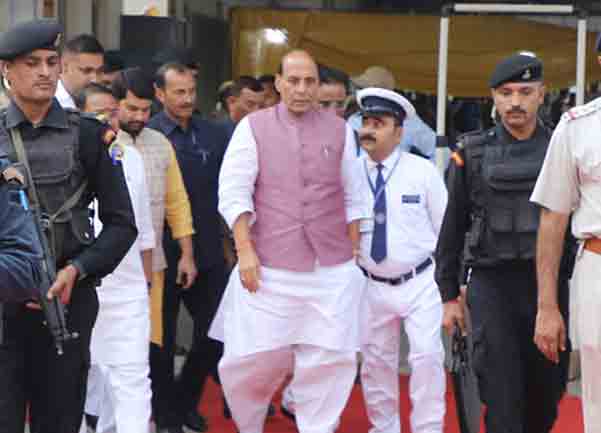 Raksha Mantri Mr Rajnath Singh has said that India’s rise to power is not to scare anyone but is guided by the spirit of welfare of the whole world. Speaking at the 98th Convocation of the Delhi University in New Delhi on Satuday, 26 February 2022, he said that India aspires to be Jagat Guru again and the dream is to make the country powerful, rich, and also knowledgeable.

Highlighting the government’s effort to build an entrepreneurial ecosystem for the development of youth, he noted that there was no start up ecosystem in the country earlier, however the scenario has changed rapidly in the last seven years.

“There were only 500 start-ups in country in 2014. But this number has gone to sixty thousand this year,” he said. “45 new unicorns were registered in 2021 taking the number of unicorns in the counry to 83; however in the first 50 days of this year 10 more unicorns have further joined them,” he added.

Terming youth as the biggest source and catalyst of change in any country, he said youth is the greatest power our country has and  its future depends on the youth power. Stressing on innovation, invention and ideas, he urged the youth to come forward with a clear objective to take the leadership role to innovate, to invent and establish new companies and research establishment in the country.

Congratulating all students receiving degrees and awards at the ceremony, Shri Rajnath Singh said that Delhi University will be completing its centenary shortly, and during these 100 years, the university has established its credentials across the world. Shri Rajnath Singh noted that it’s the only university where the colleges bear the names of great entities and personalities across Ancient, Medieval and Modern ages. Raksha Mantri said that the alumni of Delhi University have spread across the world and have been successful in every sphere, instilling a sense of pride in their alma mater.

Recalling the ancient roots of the word “Deekshant” (Convocation) in the Taittiriya Upanishad, Shri Rajnath Singh highlighted the importance of values to education. He added that as the students step out into the world, they will have new avenues of learning. He further said that every body of knowledge has an applied aspect just like every theory has an applied science. He urged students to commit to working with their skill set in an applied mode in every field.

Shri Rajnath Singh said that at a time when the coutry has entered into the Amrut phase we all should remember and adhere to the great Indian tradition of equality, harmony and knowledge.

“There was a time India was a Vishwa Guru and its golden story was mentioned in History. As we are moving on the path of New India, our young generation needs to connect with the glorious cultural roots,” he added.

Recalling the ancient times when India was the leader in science and knowledge, Raksha Mantri said that people are not aware of this glorious past because of long phase of slavery.

“Zero was given to the world by India which made counting possible. Quadratic Equation was invented by the great Sridharacharya. It has been proved now that Bodhayan had found Pythogorus Theorem, 300 years before Pythogorus did. Calculus was available in the written form in Kerala over three hundred and fifty years before Newton propounded it. About one thousand years before Copernicus, Aryabhatt had proved that the Earth was round and it rotated on its axis,” he said.

Talking about the spiritual strength of the country, Shri Rajnath Singh said, eminent personalities like Mark Zukerberg and Steve Jobs have also mentioned that in the time of crisis in their lives, it was spiritual places like Kaichi Dham Temple of Neem Karoli Baba at Naninital in Uttrakhand where they found peace, positivity and new direction in life.

Underlining the significance of values in life, Raksha Mantri stressed that Samskara is more vital and important than becoming intelligent, meritorious and wealthy. He said there are numerous examples like Afzal Guru, Yakub Menon, and Osama Bin Laden to demolish the construct that lack of education and poverty were the only resons for terrorism. He called upon youth to take the pledge to refrain from any activity that goes against the country.

He said problems like poverty and hunger have still not been eradicated from the country and a quality education can be the only tool to eliminate them.