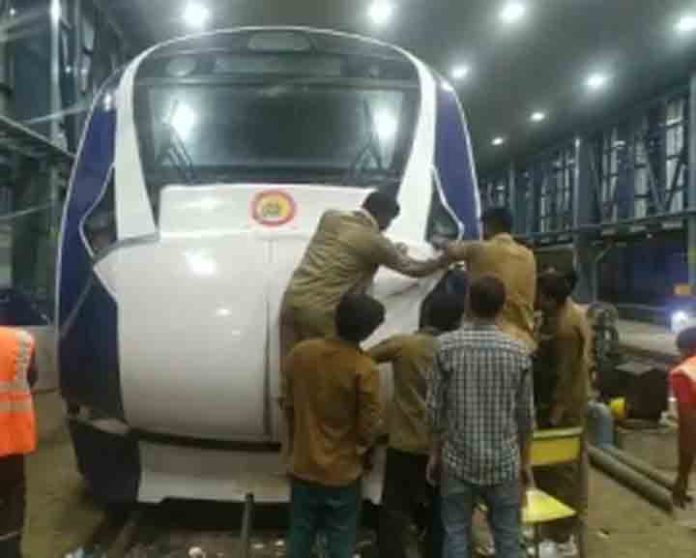 India’s first high-speed Vande Bharat train met with an accident on Thursday. There was no loss of life in this accident, but the front part of the train was damaged. Vande Bharat has been cured at Mumbai Central Coaching Care Center. Vande Bharat and railway engineer supervisor and working people have fixed it together. Its front end has been reassembled. Now this train will again run on Ahmedabad and Mumbai track.

In fact, the high speed Vande Bharat train had become a victim of the accident at 11:18 am on Thursday. The train collided with a herd of animals near Vatva and Maninagar stations. This train was coming from Mumbai to Ahmedabad. In the accident, the front part of the Vande Bharat train broke down and fell down.

According to information received from the Ministry of Railways, the train had to stop for about 20 minutes after the accident. At present, the train has been repaired and dispatched. This Vande Bharat train was flagged off by Prime Minister Narendra Modi on 30 September. This train can reach a speed of 180 to 200 kmph. This is the third Vande Bharat train in the country. Earlier Vande Bharat train was running between New Delhi and Varanasi and New Delhi and Mata Vaishno Devi Katra. This train goes from Gandhinagar to Mumbai via Ahmedabad and then comes back to Gandhinagar on the road. PLC/GT

First National Coal Convention and Exhibition to be held in Delhi

PM Modi flagged off the inaugural run of the new Vande Bharat Express from Amb Andaura, Una to New Delhi