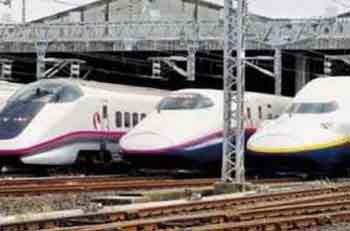 India’s ambitious ‘Bullet Train Project’ will not have to wait much longer. The first trial of the bullet train will be between Bilimora and Surat in Gujarat in 2026. According to the climate of India, some special changes will be made in comparison to the foreign bullet train. The first Bullet E5 series train to run in India is a variant of the Japanese Shinkansen high-speed train manufactured by Hitachi and Kawasaki Heavy Industries. The widest of such trains is available only in countries like France and Germany. The width of the bullet train running in India will be 3.35 meters.

According to the information, the Japanese are also working on the aspect that these trains should be able to carry Indian weight, because the reason for the Japanese is less. Japan’s high-speed train Shinkansen (Bullet train in India) is now being modified in India to suit the Indian climate and utility.

This train is being modified according to the temperature, dust and weight of India.

The construction of the Bullet Train Corridor in the country has gained momentum at present. According to information received from the National High Speed ​​Rail Corridor, the first trial of bullet train in the country will be held between Bilimora and Surat in Gujarat in 2026. During this, the speed of the train will be 350 km per hour. Which is approximately the speed of the planes in flight. However, the operating speed of the train will be kept at 320 kmph.

The communication system of bullet train i.e. high speed train is designed like the communication system of aircraft. It will have an emergency button for passengers. If there is any problem during the journey, then the passengers will be able to inform the crew of the bullet train about their problem. The coach has been made completely sound proof. Panels will be installed in the coach like double skin aluminum alloy, air tight floor, sound absorbing side cover etc. Along with this, all the cars will be equipped with Active Suspension System to reduce vibration. Keeping in mind the comfortable seat, all the cars will have reclining seats.

The country’s first bullet train project is between Ahmedabad in Gujarat and Mumbai, the capital of Maharashtra, on which work is progressing rapidly. Under this, the work of pillar in Bharuch (Gujarat) has started to be seen complete, whose first test will be done between Bilimora and Surat in Gujarat in 2026, after that tests will be done in other sections. PLC &GT