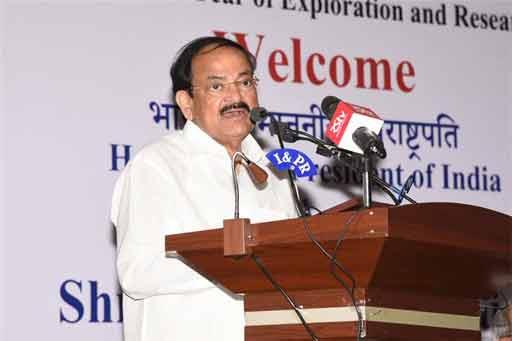 INVC NEWS New Delhi, The Vice President of India M. Venkaiah Naidu has said that nuclear electricity could significantly reduce Greenhouse Gas Emissions and has the potential to meet increasing energy demand in the country. Addressing Scientists and the Staff of Atomic Minerals Directorate for Exploration and Research (AMD), in Hyderabad today, on the occasion of 70 years of exploration and research by the organization, he pointed out that climate change was one of the foremost environmental concerns today. Stating that the need of the hour was to ensure that modern technologies were safer and reliable, the Vice President observed that nuclear power was one of the reliable and safe energy options and commended India’s record of operating our nuclear fleet for over 40 years without any serious incident. Shri Naidu said India’s abiding interest in nuclear energy grew out of a deep conviction that the power of atom could be harnessed to help the country to achieve human and societal development. He said that India has consciously made a strategic choice to pursue a low-carbon growth model in the coming decades and added that reducing pollution was a major challenge. Appreciating the efforts of AMD in adopting state-of-the-art exploration techniques in search of different strategic minerals, the Vice President said it was heartening to know about the availability of more than 3 lakh tonnes of uranium oxide reserves and around 1200 million tonnes of Beach sand Mineral resources in our country. “More significantly, the quantum leap in Uranium resource augmentation by AMD from around 1 lakh tonnes during first 60 years of activities and a subsequent addition of around 2 lakh tonnes in the next 10 years is really commendable”, he added. Shri Naidu also expressed confidence that exploration efforts of AMD in different parts of the country, including Cuddapah Basin would lead to more uranium mines. With several favourable geological domains spread across length and breadth of the country which can host potential Uranium, Rare Metals and REE deposits, the Vice President said it would be possible to achieve self-sufficiency in atomic mineral resources for sustainable growth of our Nuclear Power Programme. Considering the steep demand for power in the country, the role of nuclear energy in future would be quite significant. “We need to develop new and more efficient technologies to utilise our resources to the maximum”, he added. The Director of AMD, Mr. M.B. Verma and other senior scientists and officials were present on the occasion. Earlier, the AMD officials made presentation on the activities of the organization to the Vice President. The Vice President also unveiled a plaque on ‘Cuddapah Monolith’ to commemorate 70 years of exploration and research by AMD.