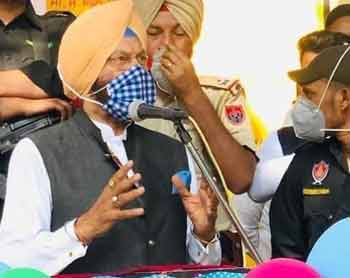 Fulfilling the announcement made by the Chief Minister Capt. Amarinder Singh, Rana Sodhi handed over a cheque of Rs.2.51 crore to “Golden Boy” Neeraj Chopra during the felicitation ceremony held at Punjab Bhawan, while Rs.50 lakh cash prize was given to cyclist Gurlal Singh, who had clinched a bronze medalist in Jakarta Para-Asian Games-2018.

Addressing the gathering, Sports Minister Rana Sodhi expressed gratitude towards the Chief Minister for bestowing the highest amount of cash prizes to the sports persons across the country. He also announced that in the coming days, cash prizes would also be distributed to the remaining national and international players. He said, the new sports policy of Punjab was gaining momentum and Punjab was fast moving towards its numero-uno spot in the arena of sports, expressing hope that Indian sports persons would bring laurels to the country in the Paris Olympics-2024 too.