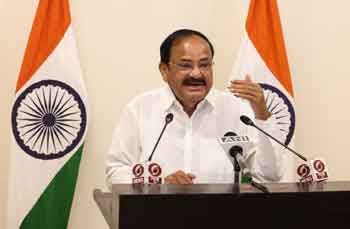 Indian civilisation stands for the universal values of unity, peace and social harmony

The Vice President, Shri M. Venkaiah Naidu today said that Indian civilisation stands for the universal values of unity, peace and social harmony, and called for a ‘spiritual renaissance’ to preserve and propagate these age-old values.

Addressing a gathering after releasing the book, “Sing, Dance and Pray – the inspirational story of Srila Prabhupada” at Upa-Rashtrapati Nivas today, the Vice President asked youngsters to take inspiration from great saints and spiritual masters like Swami Prabhupada and imbibe qualities of discipline, hard work, patience and empathy to become better human beings. “You must always rise above narrow considerations of caste, gender, religion and region and work for bringing unity, harmony and peace in society,” he added. The book authored by Dr. Hindol Sengupta is the biography of Srila Prabhupada, founder of ISKCON.

Crediting Srila Prabhupada with popularisation of The Bhagavad Gita’s message across the world, the Vice President called him as one of the greatest ambassadors of India’s cultural heritage in the modern era. Terming spirituality our greatest strength, he said that spirituality has been the soul of our nation and the foundation of our civilisation since ancient times. Praising our ancient scriptures for their transcendental spiritual value, Shri Naidu said that for millennia, they have been manuals directing people to lead an ideal life based on ethics and values. “Our scripture The Bhagavad Gita provides insightful solutions to all the problems of human existence, ranging from approaches to liberation from suffering, to self-realisation and attaining moksha or salvation, to the nature and significance of dharma to the overriding importance of action, devotion and a wide array of other philosophical questions,” he added.

Calling India as the land of devotion, Shri Naidu said that bhakti runs through the veins of Indians and is the lifeline of India’s collective civilizational consciousness. Shri Naidu pointed out that many rishis, munis and acharyas in India had uplifted the masses through the non-sectarian, universal method of worship, and lauded SrilaPrabhupada for preaching the message of “Vasudhaiva Kutumbakam”.

Describing SrilaPrabhupada as a torchbearer of egalitarian thought, the Vice President said that he embraced those discarded by society and brought joy and fulfilment to their lives. Admiring Srila Prabhupada’s untiring efforts towards universal peace and harmony through the propagation of Vedic knowledge and culture, Shri Naidu said, “the only criterion he stressed was bhakti, or love of God.” The Vice President also appreciated the efforts of Sri Madhu Pandit Das, President of ISKCON, Bangalore in carrying forward his Guru’s mission.

Recalling Swami Prabhupada’s wish that no one within a ten-mile radius of a Krishna temple should go hungry, the Vice President praised ISKCON for its wonderful spirit of service. Referring to this spirit of service and ‘share & care’ as the core of the Indian value system, Shri Naidu wanted the youth to inculcate these values and, towards this end, suggested making community service compulsory in schools and colleges. The Vice President also commended the ISKCON led Akshaya Patra Foundation — the world’s largest NGO-run school lunch programme – for rendering invaluable service to underprivileged children and communities.

Congratulating the author Dr. Hindol Sengupta and ISKCON Bangalore for publishing the book – Sing, Dance, and Pray, the Vice President termed it a fitting tribute to SrilaPrabhupada on his 125th birth anniversary. He expressed the hope that the biography will inspire its readers to apply this principle in their daily lives. He also encouraged the author and the publishers to get the book translated into various Indian languages.

President of ISKCON Bangalore and Chairman of Akshaya Patra Sri Madhu Pandit Dasa, Vice Chairman Sri Chanchalapathi Dasa, author of the book and historian, Dr. Hindol Sengupta, devotees from ISKCON and others were present during the book launch ceremony.