Home Other Indian State News Indian Army and its formation along Northern frontiers apart from their primary... 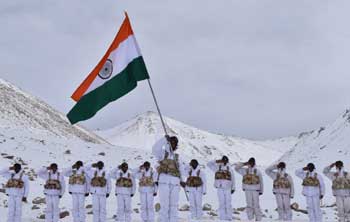 India’s North-East region has immense and so-far largely untapped potential for tourism especially the adventure tourism, a sector which can generate much needed local employment and sustain the local economy through an eco-system of tourism associated economic activities. While there are number of initiatives undertaken by the separate state governments of each state in this regard, a concerted, synergised and integrated effort was recently made by the Indian Army through a series of adventure activities across most of the border regions from Sikkim to nearly the Eastern most tip of Arunachal Pradesh.

Indian Army and its formations along Northern frontiers apart from their primary role have a stellar record in their nation building initiatives as were. The trans-theatre adventure activity along the line of actual control (LAC) this year was one such initiative in which adventure activities such as Mountaineering Expeditions, White Water Rafting, Mountain Biking and Trekking were conducted with very active participation from civilian enthusiasts and local talent from the region. The most heartening aspect of this was the unique Civil-Military cooperation in actively promoting the adventure tourism across Sikkim and Arunachal Pradesh in challenging places which were not very well known thus far.

This roughly three-month long series of expeditions started in last week of August and included six mountaineering expeditions, seven treks of more than 700 kms (up to an altitude of 16,500 feet), six cycling expeditions over 1,000 km on non-existent roads in six valleys, and three white water-rafting expeditions covering 132 kms along three rivers. Most of these routes along the LAC have never been explored by civilians, due to inaccessibility of these areas.

11 points along the LAC were contacted during the initiative, with the most prominent being the summit of Mt Jonsong, situated at the tri junction of India – Nepal & Tibet, for the third time in history.

The campaign has generated a buzz in the adventure tourism circuit and has improved awareness about the potential of adventure tourism in North-East India. This event while showcasing the importance of Civil-Military synergy, also helped in highlighting the beautiful pristine landscape, flora, fauna, culture and traditions of these remote untouched border areas and will boost tourism into these locations. Inclusion of the local youth and the experience they have gained here is likely to encourage them in becoming entrepreneurs in the field, raising hopes of creating a sustainable eco-system of such tourism start-ups. Another important facet was inclusion of women in the activities. As a boost to Nari Shakti, approximate fifteen female members took part in these activities.

Active participation and cooperation between state governments and the Indian Army and the inclusivity shown in this initiative, wherein both men and women, local talent as well as the enthusiasts from varied places took part for a worthy cause; is a sign of the changing times and a bright future for the North-East.