Home Business India – US relations are strong and this will strengthen the global... 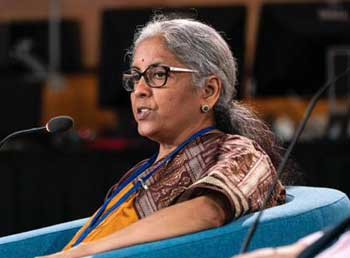 The Finance Ministry informed about these meetings in several of its tweet messages. Several issues related to strengthening economic ties between India and South Korea were discussed between Sitharaman and Nam-ki. The meeting took place on the sidelines of the International Monetary Fund Summit.

In this meeting, the chairmanship of the G-20 group to be given to India next year and other financial issues were also discussed. Sitharaman also discussed various bilateral issues with South African Finance Minister Godangwana Inoch. During this, Sitharaman expressed deep grief over the loss of life and property due to the floods in Durham and KwaZulu Natal provinces of South Africa.

Finance Minister Nirmala Sitharaman said on Tuesday that the US-India relationship is strong and will strengthen the global order in these challenging times. In the video of the conversation released by the research institute Atlantic Council, he said that it is time these two big democracies have found their rightful place and they are comfortable working with each other.

Sitharaman said that US-India relations are strong and this will strengthen the global order. “However, the global order itself is something that we have to look at anew. Today the multilateral institutions are not really as strong as they are,” she said. that they were at one time.” “Times are changing. I think, this kind of relationship between the US and India is a sign of positive development,” Sitharaman said. PLC & GT

inflation is ready to give another big blow in July

North Korea has completed preparations for a new nuclear test

Drug Destruction Day : Around 42000 kg narcotics would be destroyed at 14 locations across the country