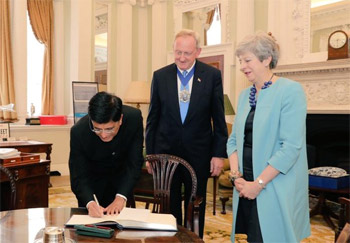 INVC NEWS
New Delhi,
Union Minister of Commerce & Industry and Railways, PiyushGoyal, addressed the UK-India Joint Economic and Trade Committee (JETCO) in London on Monday. He spoke about various issues related to trade, commerce and the services sector that will boost economic engagement between the two countries.

While addressing the gathering, PiyushGoyal said that this joint initiative will expand the economic and commercial ties of India and the UK.He further said that both the countries are bound by a strong shared past of a 200-year relationship.

He emphasized on leveraging on the opportunities, particularly in the post-BREXIT scenario and also the strength of the 1.5 million strong Indian community settled in the UK who are a bridge between the two countries. He expressed confidence that both India and the UK have huge potential to expand economic ties further and leapfrog to newer heights.

PiyushGoyal said that he was confident that JETCO will be a powerful forum through which both the countries will identify the areas of mutual cooperation and that it can be a platform where both countries and their businesses may resolve their trade-related issues.

On the side lines of the event, India and the UK agreed to set up three new bilateral working groups to tackle barriers in specific sectors including food and drink, healthcare and data services.

The Commerce & Industry Minister called for fast-tracking of the engagements by leveraging the competitive strengths of each other for mutual benefit. He said that if the spirit of research and innovation in British industry and academia is bound together with the strength of the skilled Indian work force, the two countries may become the preferred supplier to the rest of the world. He further added that the skilled Indian manpower has the capability to translate the ideas generated in British research labs to the implementation stage.

Manufacturing in India, in a cost-competitive environment, could be the key for British companies to expand their footprints to other parts of the world. ‘Designed in the UK - Made in India’ can be the new focus area for this partnership. Similarly, in the services sector, India can provide huge technical expertise to the British companies, the Minister added.

PiyushGoyal said that he is confident that India will be a 5 trillion-dollar economy by 2025. He added that the country is well-poised towards achieving that with a major focus on investment in infrastructure where the UK can share its expertise.

While addressing the CEOs of multi-national companies in the JETCO meeting, PiyushGoyal said that India has opened up opportunities for single brand retail and is easing some detrimental clauses of the policy in next few weeks which will help single brand retail come in a bigger way to the country. He requested companies around the world to respect Indian sensitivities on restrictions of foreign investment in multi-brand retail. Particularly, e-commerce companies coming to India will have to ensure that they stay within the letter and spirit of the law when it comes to multi-brand retail and India’s policies around that, he added.

India – UK trade and economic relations are reviewed annually by the JETCO at the level of Commerce and Industry Minister. Till date, 12 meetings have already taken place and the last meeting was held on 11thJanuary, 2018 in London. The India – UK JETCO was established on 13th January, 2005, to further develop a strategic economic relationship and nurture business led vehicles to enhance bilateral trade and investment.

Around 164 Railway infrastructure projects are being executed

Strong ecosystem for startup is necessary for the country to...

This was most important collective decision for better cleaner future...

There is a huge demand for trusted partners in resilient...

India is being seen in the world as trusted and...

The policy seeks to make India economically stronger with enhanced...