Home Other Enviroment India now has a network of 49 Ramsar sites covering an area... 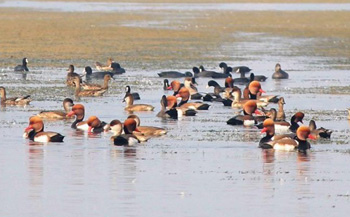 Minister for Environment, Forest and Climate Change, Shri Bhupender Yadav on World Wetlands Day 2022 stated that the government under the leadership of Prime Minister Shri Narendra Modi is taking affirmative action, involving communities and citizens, in halting and reversing wetlands degradation and loss.

India now has a network of 49 Ramsar sites covering an area of 10,93,636 hectares, the highest in South Asia.  Bakhira Wildlife Sanctuary in UP provides a safe wintering and staging ground for a large number of species of the Central Asian Flyway while Khijadia Wildlife Sanctuary is a coastal wetland with rich avifaunal diversity providing a safe habitat to endangered and vulnerable species.

As a part of India’s commitment towards conservation, restoration and management of India’s wetlands, Shri Bhupender Yadav administered the wetlands pledge to the wetland mitras and everyone present to protect and conserve our wetlands.  Dignitaries also participated in ceremonial plantation and visited exhibition area and Interpretation Centre.

On the occasion, “National Wetland Decadal Change Atlas” prepared by the Space Applications Centre (SAC), Ahmedabad was also released highlighting the changes which have happened in Wetlands across the country in the past decade. The original Atlas was released by SAC in 2011 and has over the years been used extensively by all the State Governments also in their planning processes.  The change Atlas is available on the wetlands of India portal https://indianwetlands.in/resources-and-e-learning/library/ website.

Expressing happiness that Haryana has last year only received International Ramsar tag for two of its sites, Chief Minister of Haryana exhorted all to conserve the wetlands and nature in general and also emphasized the importance of balancing development and Ecology.

Terming the functions of Wetlands equivalent to the function played by Kidney in human body, Minister of State, spoke at length on the benefits and necessity of conserving the Wetlands of the country.

World Wetlands Day is observed every year on February 2nd all over the world. It is celebrated to raise global awareness about the vital role of wetlands for people and our planet. This day also marks the date of the adoption of the Convention on Wetlands on February 2, 1971, in the Iranian city of Ramsar. This year’s theme of World Wetlands Day is “Wetlands Action for People and Nature”, which highlights the importance of actions to ensure the conservation and sustainable use of wetlands for humans and planetary health.