INVC NEWS New Delhi, With increased sharing of information and inputs by  International Investigation agencies related to various global  crimes in recent times is helping India’s Central Bureau of Investigation ((CBI)  crack major cyber , money laundering, terror funding and tax evasion cases at faster pace. “The frequent actionable vital inputs being provided by  global investigation agencies like Federal Bureau of Investigation(FBI) ,The US probe agency and other investigation agencies from China, UK, Ireland ,Germany and host of other countries are helping CBI act against cyber criminals, money launderers, Ponzi scheme runners, terror funding organisations and tax evaders” said   Shri Amit Kumar, DIG, Economic Offence Unit, CBI while speaking at a conference on ‘Crypto-Currencies & General Data Protection Regulation (GDPR) organised by   the India chapter of The International Information System Security Certification Consortium, or (ISC)²,  a non-profit organization which specializes in information security education and certifications late last evening. “ Spurred by massive economic growth and use of internet and increase in e-commerce sales , the cybercrime is also growing at similar pace, the crimes involving crypto-currencies like Bitcoin have also become frequent in India, this is mainly linked with a larger number of illegal businesses accepting this type of money. But this is helping CBI getting more inputs from foreign agencies as well as state government agencies and helping nab criminals faster as well as helping CBI get involved in  convert operation to burst such crimes” said Mr Kumar. “Another factor that is helping CBI crack cybercrime and other global crime cases  is the faster input being provided to CBI with help of Mutual Legal Assistance Treaty (MLAT). Earlier it took about four years to get information through government to government approach. But in cyber world things change fast so quick response is needed from various sources” he added. “The craze for cryptocurrencies especially Bitcoin is catching up in India but they also continue to be a bonanza for criminals and hackers. The latest targets are people who have touted their ownership of BitCoin or other cryptocurrencies. The worst part of cryptocurrency is because they're worth stealing and transactions can't be reversed. “ said Mr Sunil Bajpai Principal Advisor (IT) at TRAI, while speaking on the occasion. “Recent Supreme Court's landmark verdict on the right to privacy, India is now moving towards a legislation on data protection. The central government had set up an expert committee to study the different issues relating to data protection in India and make specific suggestions on principles underlying a data protection bill. On the other hand  General Data Protection Regulation (GDPR) a regulation that requires businesses to protect the personal data and privacy of EU citizens for transactions that occur within EU member states is also on the anvil” said Mr Neeraj Aarora, an eminent lawyer and cyber law expert while speaking on the occasion. “India needs its own law on data protection as GDPR is not comprehensive solution for Indian environment as basis for Data Protection Act as it does not comply with various cyber security concept thus . It is also not best solution for European Union also  it may need amendments in short run” said Mr Aarora. Most of the speakers at the seminar were for strong Data Protection law before making Aadhar mandatory for various linking and verifications. The others who spoke on the occasion included  Utsav Mittal, President, ISC2, New Delhi Chapter, Talwant Singh, District Session judge, Tis hazari courts, Manmohan Sharma, Addl district judge, Rohini courts and  Sandeep Arora a finance and cyber security expert.

Sero-Surveillance Starting from Today in 11 Most COVID-19 Affected Districts...

Vedanta to expand Grassroots football Development program across the country

GMPF issues a warning asking ngos to stop playing with... 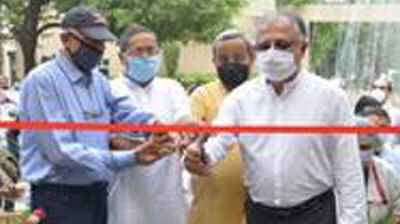 Dear Sir Your idea to enact Data Protection Act by Govt. of Infia is absolutly right. We appreciate your valuable knowledge sharing on the issue of Cyber Crime. Please keep on sharing the knowledge on Cyber Crime. Thanx

Dear Sir Your idea to enact Data Protection Act by Govt. of Infia is absolutly right. We appreciate your valuable knowledge sharing on the issue of Cyber Crime. Thanx