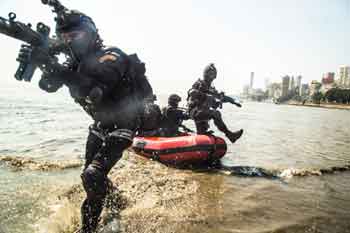 India – Malaysia joint military Exercise “Harimau Shakti -2022” commenced at Pulai, Kluang, Malaysia on 28th November and will culminate on 12th December 22. Exercise HARIMAU SHAKTI is an annual training event between the Indian and Malaysian Army which is being conducted since 2012.

Combat-experienced troops of the GARHWAL RIFLES Regiment of Indian Army and the Royal Malay Regiment of the Malaysian Army are participating in the exercise this year to share experiences gained during operations in order to enhance inter-operability in planning & execution of various operations in jungle terrain. The scope of this exercise involves a Command Planning Exercise (CPX) at the Battalion level and Company level Field Training Exercise (FTX) on sub-conventional operations in jungle terrain.

The joint exercise schedule includes the establishment of a joint command post, joint surveillance centre, sharing expertise in employment of aerial assets, technical demonstrations, casualty management & casualty evacuation apart from planning logistics at the Battalion level. Joint field training exercises, joint combat discussions and joint demonstrations will culminate with a two-day validation exercise, where special emphasis will be on enhancing tactical skills and enhancing inter-operability between the forces and to promote Army to Army relations.

“Exercise HARIMAU SHAKTI” will enhance the level of defence co-operation between Indian Army and the Malaysian Army, which in turn will further foster the bilateral relations between the two nations.