India is targeting to become a 5 trillion dollar economy 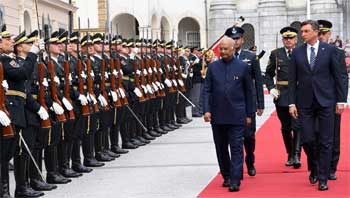 INVC NEWS
Slovenia,
The President of India Ram Nath Kovind reached Ljubljana, Slovenia, yesterday (September 15, 2019) in the final leg of his visit to – Iceland, Switzerland and Slovenia. This is the first ever presidential visit from India to Slovenia.

Today (September 16, 2019), the President commenced his engagements with visit to the Congress Square where he was received by President Borut Pahor of Slovenia and accorded a ceremonial welcome. The two Presidents also paid tributes at the Victims of All Wars.

During the subsequent one-to-one discussions with President Pahor, the President said that he was honoured to pay the first ever State Visit from India to Slovenia. The two leaders discussed possible collaboration between the two nations on a wide range of issues.

Subsequently, the President led delegation-level talks between the two sides. Speaking on the occasion, the President was happy to note that India-Slovenia bilateral trade is picking up and Indian and Slovenian companies are finding new opportunities to do business together. He said that there is significant potential to increase bilateral trade by diversifying our trade basket.

The President said that India’s growth and Slovenia’s technology and manufacturing capacity complement each other. India is targeting to become a 5 trillion dollar economy by 2025. There are immense possibilities of cooperation between the two countries in the fields of high technology, especially clean technology, robotics and artificial intelligence. Start-up and innovation sectors also present opportunities. Slovenia has developed niche technology in the defence sector and is a proven leader in the field of Artificial Intelligence, defence equipment and clean water technologies.

On the issue on Climate change and environment, the President urged Slovenia to join the International Solar Alliance and strengthen India’s efforts to combat climate change.

The President said that terrorism is one of the biggest challenges confronting us. He thanked Slovenia for understanding and supporting India on issues of core concern including cross-border terrorism. Both sides also agreed that terrorism was one of the gravest challenges confronting humanity today and that the world should come together to defeat and destroy these evil forces.

India and Slovenia signed and exchanged seven MoUs and Programmes of Cooperation in the fields of Investment, Sports, Culture, River Rejuvenation (Clean Ganga Mission), Science & Technology and Standards in the presence of the two Presidents.

Later, the President met Prime Minister Marjan Šarec of Slovenia at the Ljubljana Castle on a working lunch.  During the conversations, the two leaders discussed a range of bilateral and global issues.

Later in the evening, the President will address the India-Slovenia Business event and also attend a banquet hosted in his honour by the President of Slovenia. 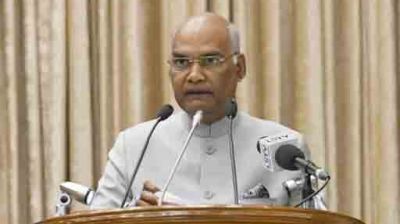 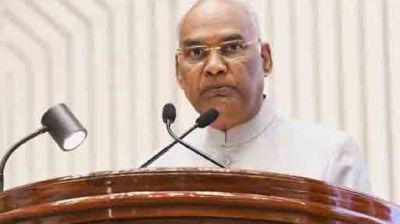