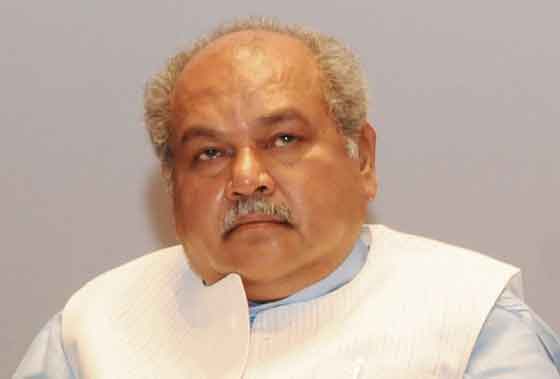 INVC NEWS
New Delhi,
Union Minister for Agriculture and Farmers Welfare, Rural Development, Panchayat Raj and Food Processing Industries Narendra Singh Tomar said that India is moving towards the goal of self-sufficiency in pulses production. “In the last five-six years, due to the tireless hard work of farmers, scientists and farmer-friendly policies of the central government, the country has increased its pulses production from 140 lakh tonnes to 240 lakh tonnes. Now we also have to pay attention to future requirements.”, The Minister stated. Shri Tomar further said that according to an estimate, by the year 2050, about 320 lakh tonnes of pulses will be required. After Prime Minister Narendra Modi’s call, the dependence on imports of pulses has reduced and the country is saving more than Rs. 15000 crores per year.Shri Tomar was speaking as the Chief Guest at the event on World Pulses Day organized by Indian Pulses Research Institute (IIPR).

On this occasion, Shri Tomar inaugurated office and laboratory buildings at IIPR’s regional centers Bhopal and Bikaner, as well as laid the foundation stone of IIPR’s regional center Khordha (Odisha). A three-day national seminar “On Self-reliance and Nutrition Security” is being organized, which is being attended by more than 700 scientists, researchers, policymakers, students and farmers, who will deliberate extensively on pulses and nutritional security.

Shri Tomar said that the World Food and Agriculture Organization has decided to celebrate World Pulses Day in view of the good impact of pulses on people health. With this, the world will focus on the promotion of pulse crops. The Minister said thatin 6 years, the MSP of pulses has been increased from 40% to 73%, which is definitely benefiting the farmers. He said that more work needs to be done on pulses to eradicate malnutrition.Indian Council of Agricultural Research should play the main role to ensure this, he added. Agricultural scientists are providing many varieties to the country, which will help in increasing both production and productivity.

Speaking about doubling farmers’ income by 2022, the Union Minister said that the central and state governments and the ICAR and farmers are working with full diligence towards achieving this goal, which will yield results. Pradhan Mantri Fasal Bima Yojana has been implemented in a modified form so that the farmers can get safety cover and they can be free from risk. In 4 years, farmers paid Rs. 17 thousand crores as premiumin Pradhan Mantri Fasal Bima Yojana, while they were paid more than 5 times, i.e more than Rs. 90 thousand crores as the claim amount. This has provided a big relief to the farmers.

Shri Tomar said that 86% of the farmers are small and marginal farmers in the country. They can earn profit only when attracted to expensive crops, connected to new technology and linked to the market. Considering this, the government has decided to make 10 thousand FPOs, on which Rs. 6850 crores will be spent and this will be fruitful for the farmers of the country. There is a great need for innovation in the field of farming and the need to abolish the legal restrictions was also being felt since a long time. In this direction, in addition to Reforms and FPO Scheme, Rs. one lakh crore Infrastructure fundhas also been established on which work has started and projects have also been sanctioned to some states. With a view to protecting agriculture and horticultural produce from damage, the schemes of Kisan Rail and Krishi Udaan have been introduced. More than 150 farmer trains have already been run and 50% subsidy is being given on rent underthe TOP scheme, the minister added.

The Minister said that better species and high-quality seeds are a major component of a good crop. Keeping this in mind, 150 Pulses Seed Hubs have been established. The overall agriculture sector should move forward, this is the need of the country. India should be self-sufficient in the field of oilseeds, scientists are constantly doing research in this direction, he added.