India is committed to taking proactive measures to counter the challenges they throw up : Dr Harsh Vardhan

INVC, Barcelona, Spain, Dr Harsh Vardhan, Union Health Minister, is in favour of a complete ban on e-cigarettes and all products described as “Electronic Nicotine Delivery Systems (ENDS)”. In his clearest message yet on the controversy over the safety of ENDS, Dr Harsh Vardhan ruled out their acceptability in the light of research findings by experts which have held that they are no less unsafe than the “real thing”. The Minister, who was addressing global tobacco control experts at the 45th Union World Conference on Lung Health in Barcelona, Spain, yesterday, said that e-cigarettes and similar products push children towards the tobacco habit eventually via nicotine dependence. “In our national consultation it has been shown that children and other non-smokers tend to develop nicotine addiction at a rate greater than situations where ENDS did not exist. And after that the slide to tobacco is practically inevitable,” he said. Dr Harsh Vardhan, who is credited with writing the first ever anti-smoking consumption law in the country –The Delhi Prohibition of Smoking and Non-Smokers’ Health Protection Act, 1996 – received a rousing reception at the meeting. The Union is a 94-year-old forum dealing with lung diseases, TB and tobacco issues. He however pointed out that banning ENDS should not be an end in itself. “The success of a ban strategy will depend on how we agree to control illicit trade and cross border sales of such products. The use of the Internet for this trade should also be curbed.” India is home to 275 million tobacco users. The use of smokeless tobacco has become a major public health menace, which, if not checked in time with strong measures, could become a national threat. The aggressive marketing strategies marked by attractive packaging, flavouring and price-cuts represent a major challenge for the government. Dr Harsh Vardhan said, “I am sure all experts present here are aware of the power of the tobacco industry. India is committed to taking proactive measures to counter the challenges they throw up.” In this context, he mentioned India’s recent climbing to the first position among countries notifying mandatory printing of warnings on the largest surface area of packages containing cigarettes and other forms of tobacco. The new rules demand pictorial health warnings on 85 percent on both sides of tobacco packs. The government’s clamping of the highest ever rates of taxes and reduction of duty free allowance on all tobacco products has in fact become a test case of State intervention. Delegates here greeted Dr Harsh Vardhan’s advocacy behind this Union Budget announcement and sought his advice on similar proposals considered in other countries. Dr Harsh Vardhan said that he had a definite road map for the future. This includes institutionalising a 24-hour telephone helpline (to be called “Quitline”) to counsel tobacco users who are fighting the habit. Also on the anvil are five tobacco testing laboratories at the national and regional levels, setting up 27 new state tobacco control cells during the present financial year and Amendments to the Cigarettes and Other Tobacco Products Act, 2003 to ensure better implementation and enforcement.
Read the full article
Tags: invc Chief Minister Spain Barcelona India dr harsh vardhan Union Health Minister India is committed to taking proactive measures to counter the challenges they throw up : Dr Harsh Vardhan Electronic Nicotine Delivery Systems ENDS proactive measures against tobacco use global tobacco control experts 45th Union World Conference on Lung Health in Barcelona Delhi 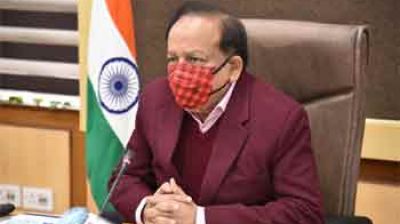 Many countries have shown interest to emulate India’s successful journey

Maintaining a polio-free status for 10 years is a huge...