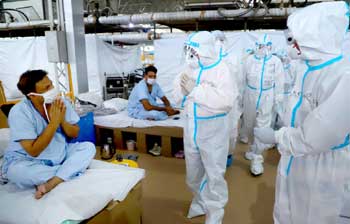 India has reported more daily recoveries than the daily new cases during the past 24 hours. While 35,551 persons were found to be infected with COVID in India, during the same period, India has registered 40,726 new recoveries. It has led to a net decline of 5,701 cases from the total Active Caseload in the last 24 hours.

The new recoveries continue to overtake the daily new cases continuously since the past 6 days. India’s active caseload has fallen under the 4.5% mark today.

The trend of more daily recoveries than the daily cases has led to a continuous contraction of India’s Active Caseload. It has ensured that India’s present active caseload of 4,22,943 consists of just 4.44% of India’s Total Positive Cases. New Recoveries outnumbering the daily New Cases has also improved the Recovery Rate to 94.11% today. The total recovered cases stand at 89,73,373. The gap between Recovered cases and Active cases is steadily increasing and presently stands at 85,50,430.

77.64% of the new recovered cases are contributed by ten States/UTs. Ten States/UTs have contributed 75.5% of the new cases. 21.10% of new fatalities reported are from Maharashtra which reported 111 deaths. Delhi also saw a fatality count of 82 while West Bengal reported 51 new deaths.