India has emerged a strong economic and modern powerful nation

While paying his rich tributes in the memory of great martyr’s of freedom struggle, NDMC-Chairman, Shri Vijay 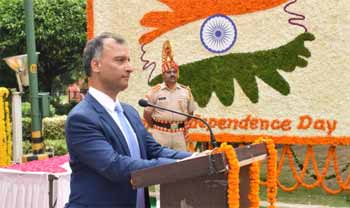 Kumar Dev has said that we should take pledge to safeguard and protect the hard earned freedom, which had been attained by the supreme sacrifices of our martyr’s, who laid their life for the freedom of the nation.

He was speaking after unfurling the National Flag to mark the 73rd Independence Day at NDMC Head-quarter at Palika Kendra in New Delhi today.

The chairman said that India has emerged a strong economic and modern powerful nation in the world and our unity in diversity had been universally acclaimed. And said that New Delhi Municipal Council (NDMC) has had been popularly known in the country for its excellent civic services being delivered to the inhabitants of New Delhi area and the credit for it goes to all ranks of the NDMC, he added.

Exhorting the team NDMC, Shri Dev said that each and every one should come forward to re-dedicate himself with the sense of devotion, zeal and spirit to deliver their best to make over New Delhi area and the capital city as a livable and pride place of the nation.

The Security and Fire Personnel of the Council extended guard of honour to the Chairman and NDMC schools children recited patriotic songs and sweets packets were distributed amongst the children on this occasion.

Besides, Member of the Council, Shri B.S.Bhati, Secretary-NDMC, Smt.Rashmi Singh, Senior Officers, teachers, students and other officials of the various departments had participated in Independence Day celebration.

E- invoicing will improve ease of doing business and reporting...