Home Latest news India and Maldives have much in common 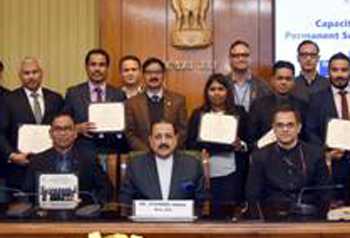 The MoS (PP) Dr Jitendra Singh addressed the valedictory session of the capacity building program for the Permanent Secretaries and Secretary Generals of the Republic of Maldives, conducted by the National Centre for Good Governance (NCGG), Department of Public Grievances and Pensions (DARPG),  Ministry of Personnel, Public Grievances & Pensions, here today. He also presented the certificates on the occasion.

Addressing the valedictory session, Dr Jitendra Singh said that these programmes help in providing training in implementation of ease of governance which leads to ease of living for citizens. He said that these programmes have now been institutionalised and developed into a healthy convention. He added that these initiatives will help in promoting healthy relations with the neighbouring countries. Dr Jitendra Singh said that Prime Minister Shri Narendra Modi has been emphasising on good relations with the neighbours from the beginning, with ‘Neighborhood First Policy’. The Minister said that India and Maldives have much in common and there is a lot we can learn from each other, the Minister said.

The Minister said that Prime Minister has adopted the mantra of ‘Minimum Government, Maximum Governance’ and given priority to the last man in the last queue. He added that the Government’s emphasis has been on citizen-centricity, transparency and citizen-participation. He further said that the Government has done away with many obsolete rules and laws. The Minister emphasised on the maximum and optimum utilisation of technology. He mentioned about many portals including RTI portal. He added that the emphasis is on e-governance and paperless governance, which has made many things easier and simpler. The ease of governance leads to ease of living, he added.

Dr Jitendra Singh said that the Grievance redressal mechanism has been made prompt and pro-active by the Government. The mechanism has been institutionalised now with the number of grievances lodged increasing from 2 lakh earlier to about 16 lakhs now. This increase is due to the trust shown by the people of the country in the grievance redressal mechanism of the Government, the Minister said. He also spoke about 360 degree appraisal system adopted by the Government for promotions in order to avoid arbitrariness. He emphasised upon the collaboration between the two countries in the area of administration and governance.

Mr. Abdulla Saeed, DG, Maldives Civil Service Commission and Head of the visiting delegation expressed his gratitude to NCGG for conducting this training. He mentioned about the learnings in the fields of technology, policy and other areas. He wished for good India-Maldives relations.

Secretary, DARPG inaugurate the Symposium on ‘Imagining India@2047 through innovation’