Home Other Indian State News India accounts for more than 11 per cent of the global road... 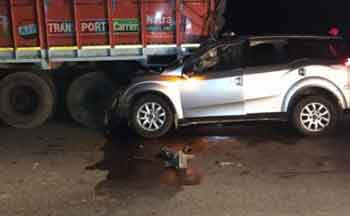 India chapter of the International Road Federation (IRF-IC) , a global body working for better and safer roads worldwide along with the Union Ministry of Road Transport and Highways (MoRTH) and Rajasthan Government State Government, as part of its initiative to  make highways safe in the country, have started training in First aid of bystanders and persons of road side facilities including Village Panchayats, Road Side Estbalishments to provide pre-hospital aid to accident victims on the one of the most accident prone 180 km long Paniyala mod to Dudu section stretch on National Highway 48 (formerly NH8) in Rajasthan .

“Training of bystanders such as truck drivers, dhaba owners and staff, puncture shops, tea stall, petrol pump workers and road side communities are important to infuse knowledge of road safety and first aid among public who are most often the first to witness/reach accident sites. This will also help in filling the gap in deficiencies in trauma services, create capacities and strengthen Pre-hospital care within the Golden Hour, in the States in India. Fatalities can be reduced if first aid and trauma care is provided at the accident site itself,” Said Mr Satish Parakh, President, International Road Federation- India Chapter  (IRF-IC)

“More than 9250 people were killed in over 19,114 road accidents during the year 2020 as compared to 10,563 deaths in 22,000 crashes in the year 2019 in the state of Rajasthan. The decline in deaths was registered mainly due to Covid lockdown. The Rajasthan state accounts for highest road accident deaths in the country as per the Ministry of Road Transport report .”said Mr Parakh.

“IRF-IC, as part of its initiative to reduce accidents in the desert state is developing this accident prone stretch into a demonstration forgiving road with almost zero fatalities and serious injuries soon. Forgiving Roads (FR) is a global concept aimed at avoiding or minimizing the harm and consequences of traffic accidents.. with use of innovative technologies including adding crash safety features , improving road engineering ,removing black spots, lane-marking, safety signboards, adding crash-barriers, curve-treatments and development of all major junctions with safer measures makes road safer and help in forgiving the human errors or the driver faults . “ said Mr Parakh.

“As part of its initiative, the International Road Federation -India Chapter (IRF-IC) has chosen Seven worst affected highway stretches of 100-200 kms each in the 7 States with highest road accidents, namely, Karnataka, Kerala, Madhya Pradesh, Maharashtra, Rajasthan, Tamil Nadu and Uttar Pradesh. The objective of the exercise is to transform these highway stretches, in association with the State Governments and Authorities, into forgiving roads with almost zero fatalities and serious injuries.  The transformation is intended through a series of corrective road safety management measures addressing the Es of road safety namely, Engineering, Education, Enforcement and Emergency Care.  On completion of the corrective actions, this will serve the validation purpose.” Said Mr K K Kapila, President Emeritus, International Road Federation (IRF) Geneva based global Road safety body.

“The Union Minister for Road Transport and Highways had earlier addressed the Chief Ministers of the selected States and the process of identifying the highway stretches and other associated actions in this regard are in progress. The Rajasthan Government selected this stretch as the most accident prone . The Road Safety Audit for this section of the expressway has already been done by the IRF-India identifying risk factors related to road design or traffic control that may lead to crashes, or make crashes more severe and identified engineering weaknesses and hazardous locations on this stretch “ said Mr Parakh.

“India accounts for more than 11 per cent of the global road accident deaths mainly due to absence of safety measures . Many fatalities and serious injuries on Indian roads could have been saved if recommended road safety actions had been implemented, the United Nations has set a global ‘Decade of Action’ plan for Road Safety which aims to reduce road fatalities by 50 per cent till 2030 and Indian Road Transport and Highway  Minister Mr Nitin Gadkari has set year 2025 as target for reducing road deaths by 50% “ said Mr Biju Muthu, CEO, IRF-India Chapter

“The road safety audit on the demonstration stretch of Paniyala Mod to Dudu section in the state has already been done and will help remove the road safety deficiencies, identify black spots and rectify engineering faults. The proposed stretch will be developed as per standards of the Indian Road Congress and serve as an effective vaccine for road safety in the state. The cost of developing it will be borne by IRF India chapter in league with major corporates“, said Mr Muthu

Children are the most vulnerable, especially riding on two-wheelers in road accidents