Home Latest news If the strong is helping the stronger than India needs a weak... 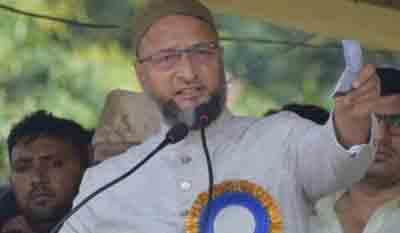 If the strong is helping the stronger than India needs a weak PM : Owaisi

Speaking to reporters, Owaisi said that if China is sitting on our land, then the Prime Minister does not answer. When asked why the loans of industrialists were waived, he says that the system does not allow me to work. He has more than 300 MPs. After Pandit Nehru, if there is a powerful PM for the second time, even after that he talks about the system. That is why I believe that the country needs a weak Prime Minister. To see the strong, now the weak are needed so that he can help the weak. The mighty is helping the mighty. He was not even looking at the weak. I want khichdi government to be formed in the country because the khichdi of Gujarat, Hyderabad and Uttar Pradesh is different.

Responding to a question about the Arvind Kejriwal-led party, Owaisi said there is no difference between the Aam Aadmi Party and the BJP. At the time of elections, allegations and counter-allegations happen. People are smart. These people are making promises but the public will give their verdict. It is worth noting that this time AAP and AIMIM have also announced to contest the assembly elections in the state which is usually contested between Congress and BJP and the entry of these two parties has made the election very interesting. PLC/GT