INVC NEWS New Delhi, “India is committed to combatingAntimicrobial Resistance (AMR). However, a collective action is required by all stakeholders within a country and by all countries within a region. India,will be very happy to work with other Member States towards this common goal”, said Shri JP Nadda, Union Minister of Health and Family Welfare. He was speaking at the inauguration of the 3-day International Conference on Combating Antimicrobial Resistance, here today. Also present at the function wereMr. TandinWangchuk, Health Minister of Bhutan;Mr. Ram JanamChaudhary, Health Minister of Nepal;Mr. Mohamed Habeeb, Minister of State for Health, Maldives; Dr. PoonamKhetrapal Singh, Regional Director, World Health Organization, South East Asia Region and Dr. Keiji Fukuda, Assistant Director General, World Health Organization. Noting that AMR has emerged as the number one public health challenge faced by the world today, the Union Health Minister stated that the first step in addressing the problem of AMR is to avoid the need for antibiotics at all in the first place. He further added that this is best done through improved water and sanitation, in the absence of which the proliferation of diarrheal diseases results in inappropriate antibiotic use. Through the Swacch Bharat programme, the Government has taken active steps to improve hygiene and sanitation and reduce the environmental spread of pathogens, he said. Vaccination is an equally important public health measure. Through Mission Indradhanush, India has set itself an ambitious goal of increasing routine immunization coverage to 90% within just a few years. ShriNadda stated that the complexity of AMR is also fuelled by numerous stakeholders impacting and impacted by AMR. These include the consumers or the patients who take the medicine, doctors who prescribe, pharmacists who dispense, the industry which manufactures, the Government which regulates, the research organizations which innovate, the animal and agricultural sector which contribute to the food chain, the hospitals which treats the patients, the Civil Society which articulates the peoples’ perspectives, and the media which can focus attention on this important issue. Given this scenario, the Health Minister pointed out that it is imperative that all stakeholders connected with AMR contribute to pave the way for effective action to combat AMR.ShriNadda also pointed out to the grave economic consequences that countries across the world are facing due to non-rational use of antibiotics. He emphasized on correct prescription practices, prescription audits and digital repository of patients’ medical history among other important measures to be taken to combat the growing misuse of antibiotics. ShriNadda extended India’s commitment and resolve to work with other countries towards combatting this problem. Drawing attention to the importance of surveillance and monitoring, Shri B P Sharma, Secretary (HFW) laid emphasis onthe role of regulatory authorities.He informed that the Ministry has undertaken an exercise for mapping health facilities in the private and public sectors across the country which shall be complete in the next three years. This shall provide a useful database to analyse the various determinants and impacts of non-rational use of antibiotics. Dr.SaumyaSwaminathan, DG, ICMR, said that community based surveillance will play a very major role in finding solutions to Anti-TB drug resistance and other viral diseases. Noting the AMR is a top priority at ICMR, there is need to study how resistance spreads and what are the drivers for AMR, she stated. Providing a regional perspective on AMR, DrPoonamKhetrpal Singh, Regional Director, WHO, said that by 2050 AMR will contribute to around 10 million deaths worldwide. Therefore, urgent action is needed to combat AMR globally. This will need policy commitment from the governments, sustained investment, technical assistance and regional cooperation. She applauded India commitment to combat AMR and the steps India has taken in this direction. Dr. Mohamed Habeeb, MOS Health, Maldives stated that AMR is a major public health issue globally that is challenging several advances made in health sector. DrHabeeb further said that awareness programme for containment of AMR is the need of the hour. Bhutan Health Minister,Mr. TandinWangchuk, called AMR a public health challenge and priority. He said that the inappropriate use of antibiotics is leading to high mortality and morbidity resulting in serious social and economic consequences. Mr. Ram JanamChaudhary, Health Minister of Nepal extended full cooperation for countering AMR. He said his government will be happy for cross border collaboration on this issue. He also emphasized on the need for rational use of antibiotics. Appreciating the need for media campaign for raising awareness about antibiotics, Shri J P Naddalaunched the “Medicines with the Red Line” media campaign at the function which creates awareness regarding rational usage of medicines which carry a red line on their strip. He also unveiled the Infection Control Policies for Hospitals handbook. Also present on this occasion were, Dr. (Prof) Jagdish Prasad, DGHS, Dr. Arun Panda, Additional Secretary (Health) ShriAnshuPrakash, Joint Secretary, and other senior officers of the Health Ministry, representatives of WHO, UNICEF and representatives from various countries 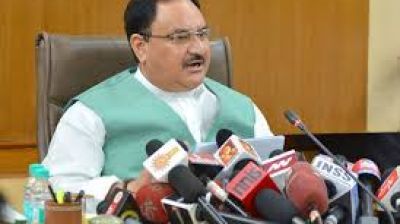