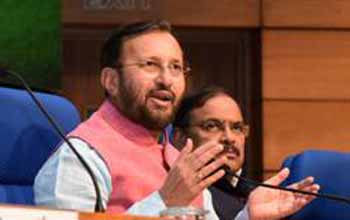 The 13th Conference of Parties (COP) of the Convention on the Conservation of Migratory Species of Wild Animals (CMS), an environmental treaty under the aegis of United Nations Environment Programme, is going to be hosted by India during 17th to 22nd February 2020 at Gandhinagar in Gujarat. This was announced by Union Minister for Environment, Forest and Climate Change, Shri Prakash Javadekar at a press conference in New Delhi today.

As the host, India shall be designated the President for the next three years.The Government of India is Signatory to the Convention on Conservation of Migratory wild Animals (CMS) since 1983. The Government of India has been taking necessary actions to protect and conserve migratory marine species. Seven species that include Dugong, Whale Shark, Marine Turtle (two species), have been identified for preparation of Conservation and Recovery Action Plan.

“Hosting CMS COP-13 is a significant step towards wildlife conservation in India. Prime Minister Shri Narendra Modi will inaugurate the opening of the CMS COP13 on Monday, 17 February 2020; representatives from 130 countries, eminent conservationists and international NGOs working in the field of wildlife conservation will be attending the COP”, said the Union Environment Minister.