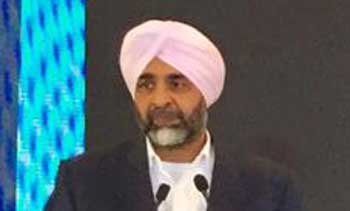 Today’s programme was held as a part of series of events being organized by the Tourism and Cultural Affairs department to invite Punjabis and Nanak Naam Leva Sangat all over the world for the 550th Prakash Purb celebrations.

During the programme, Mr. Badal said that Guru Nanak Sahib will always inspire us to stand for rights and downtrodden and fight against oppression. Chief Minister Captain Amarinder Singh led Punjab Government is celebrating Guru Nanak Dev ji’s Prakash Purb in a grand manner to spread his message of universal brotherhood and peace. He said that we all are very fortunate that the Prakash Purb is bringing a biggest gift of Kartarpur Corridor with the completion of which the prayers of Sikhs to visit Sri Kartarpur Sahib are nearing completion. He said that series of events would be organised from November 1 to 12, 2019 at Sultanpur Lodhi, Dera Baba Nanak and Batala.

To review the arrangements, the Finance Minister said, Punjab Chief Minister had visited the Sultanpur Lodhi and Dera Baba Nanak and also held cabinet meeting there. To provide best facilities to the devotees another cabinet meeting has been convened at Batala and Sultanpur Lodhi. Due to the efforts of Chief Minister, Railways has decided to extend the New Delhi-Ludhiana Shatabdi route to Sultanpur Lodhi from October, 2019. The Punjab Government has also demanded to run more special trains for pilgrims, he added.

Addressing the meeting, Mr. Singla said that the state government has strengthened the infrastructure at Sultanpur Lodhi, Batala and Dera Baba Nanak with a cost of Rs. 3300 crore and for the development of 71 villages Rs. 50 lakh per village is being spent. Not only this, 550 saplings are being planted in every village of  the Punjab. Sultanpur Lodhi and Dera Baba Nanak are being decorated with aromatic flowers. Mr. Singla said that Inter Faith Studies Institute is being set up at Guru Nanak Dev University Amritsar at a cost of Rs. 510 crore. A Heritage village ‘Pind Babe Nanak Da’ is being established at Sultanpur Lodhi.

Mr. Singla said that there was a very close relationship between Punjab and Maharashtra. Bhagat Namdev, who belongs to Maharashtra, spent most of his time in the village of Ghuman. The 10th Guru Shri Guru Gobind Singh ji merged with the eternal light at Nanded Sahib. Recalling to 2008, he said that when the 300th Gurta Gaddi Divas was celebrated at Nanded Sahib, then Prime Minister Dr. Manmohan Singh transformed the whole city.

Mr. Charan Singh Spra, representative of the Punjabi community here, lauded the Punjab government’s initiative to celebrate this historic day in a grand manner. He said that Guru Nanak Sahib Ji is a Guru of the world.

Additional Chief Secretary of Invest Punjab and Commerce and Industry, Mrs. Vini Mahajan said that the purpose of today’s event was to invite the Punjabi community of Maharastra and also to take their suggestions for the historic event.

Surinder Singh Kandhari, who established the Gurdwara Sahib in Dubai, said that this historic event would give us an opportunity to seek guidance from Guru Sahib’s life and teachings.