Height of Imbecility & Irresponsibility, Says Capt Amarinder On Bajwa’s Remarks On His Interview 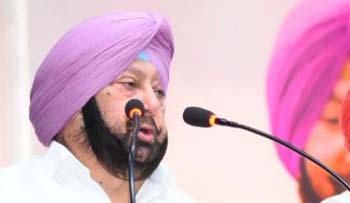 INVC NEWS
Chandigarh,
Punjab Chief Minister Captain Amarinder Singh on Wednesday took on Congress MP Partap Singh Bajwa for joining hands with the Opposition in attacking his own party’s government on the sensitive Bargari issue on the basis of a totally misleading and biased newspaper headline.

Hitting out at Bajwa for being party to the malicious propaganda unleashed by the Opposition in the wake of a blatantly incorrect heading published by an English newspaper yesterday, Captain Amarinder said the Congress Rajya Sabha MP had behaved in an imbecile manner.

Bajwa had played into the hands of the Akalis, who had been persistently trying to scuttle the Bargari sacrilege case probe, as well the Aam Aadmi Party (AAP) which was desperate to grab at any straw to find its feet in the state, especially in the run-up to the Assembly bypoll in four constituencies, the Chief Minister said. With his remarks, the Congress MP had strengthened the hands of forces trying to vitiate the peaceful atmosphere of the state, which was finally moving towards progress and development after a dark 10-year period, he added.

To react to a mere heading was the height of irresponsibility on the part of a seasoned politician, said Captain Amarinder, adding that only school children respond to headlines. Educated adults read through an entire article before coming out with a reaction, he quipped.

By criticising him (the Chief Minister) and his government after simply reading a baseless heading, Bajwa had jumped the gun, thus showing a total lack of maturity and political understanding, said Captain Amarinder.

“I would like to ask Bajwa and all the others who were so quick to attack me on the basis of that heading, did they even read the interview on which it was purported to be based?” said the Chief Minister, in a hard-hitting statement issued here. “Can they cite even one sentence which could lead to the conclusion that I had given a clean chit to Prakash Singh Badal in the Bargari case?” he further asked.

The newspaper concerned acted irresponsibly by giving a twisted heading in an apparent bid to sensationalise the interview, and these senior leaders are adding fuel to the fire by compounding the controversy, said the Chief Minister. “Don’t they have any concern about the adverse impact of their words and actions on the people of Punjab, who are only interested in development, in an environment of peace?”, he added.

Pointing out that, in the absence of any constructive issue, the Opposition had been making such groundless allegations against him ahead of every election for the past over two years, Captain Amarinder said it was unfortunate that a senior Congress leader had chosen to join the attack instead of countering it with facts. “But then, facts are for those who bother to check them out, not for those whose only interest is to gain political mileage by hook or by crook,” said the Chief Minister, mincing no words.