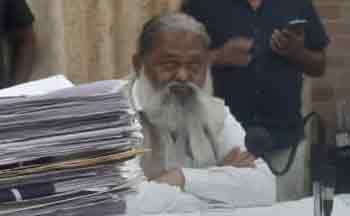 INVC NEWS
Haryana
Haryana Home and Health Minister, Sh. Anil Vij said that Haryana is being affected due to uncontrolled corona infection in Delhi. The infection rate is very high in three districts of Haryana adjoining Delhi, but we do not need to panic because of this.

During an interaction with the media persons, Sh. Vij said that Haryana has adequate health arrangements to deal with Corona.  Whether the patient comes from Delhi or anywhere else, he is being given complete treatment in Haryana.  He said that the increasing corona cases in Delhi have affected the NCR region and the infection rate has increased in Gurugram, Faridabad and Sonipat.

Health Minister said that about 9 thousand new corona cases have come in the state and half of them are from Gurugram, Faridabad and Sonipat districts.  He said that Delhi is having an impact in these three districts, but in Haryana, the Health Department has full arrangements to deal with this infection.  He said that sufficient amount of equipment and medicines are available in the state to deal with the third wave of corona.

Anil Vij said that corona vaccination is also being done rapidly in Haryana and till now the first dose has been administered up to 100 percent, similarly the second dose has also been administered 77 percent.  In addition, 7 lakh children have been vaccinated.  He said that children in the age group of 15 to 18 years who did not get vaccinated would not be given entry in the school further.

Haryana Home and Health Minister Anil Vij took a jibe at Punjab Chief Minister Charanjit Singh Channi’s demand for extension of the election date, said that the candidate who is losing election wants that elections should not be held, for this he should avoid elections and finds new excuses.  It is worth mentioning that Channi had made a demand to the Election Commission to extend the date of election.

*Akhilesh, worry about your party’s candidates, Yogi will win if he fights from any seat in UP: Anil Vij*