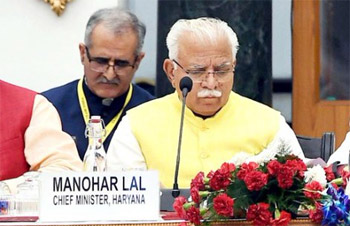 INVC NEWS
New Delhi,
Haryana Chief Minister Manohar Lal today said that Haryana Government is focusing on moving towards a high Ease of Living Index for the people of the state after systematically ushering in a new era of corruption free governance and spectacular progress on almost all indicators of human as well as socio economic development.

The Chief Minister was speaking during the fifth meeting of the Governing Council of NITI Aayog held under the chairmanship of Prime Minister, Mr Narendra Modi at New Delhi today. Haryana has become Kerosene Free and Open Defecation Free, it moved from 14th to the 3rd rank in the Ease of Doing Business and removed the blot of female foeticide. Congratulating the Prime Minister for the reconstitution of the NITI Aayog, he said that it is a hub of innovation and knowledge for the States to learn from each other and to replicate the successes and good practices of others.

Elaborating on the steps taken by the Government in this direction, Mr Manohar Lal said that being both a leading agrarian and industrial state, the State Government focused on managing and regenerating water sources in a sustainable manner.

He said that ‘Haryana Pond and Waste Water Management Authority' was set up in 2017 for development, protection, rejuvenation, conservation, construction and management of all the ponds in the state. The Authority has developed a ‘Pond Data Management Software' to monitor progress of rejuvenation and development works on over 14,000 water bodies, ancient and new alike. Of these, Gurugram Metropolitan Development Authority is working on revival of more than 500 water bodies through rain water harvesting. A comprehensive drainage plan/‘zero drain out system’ has also been taken up for Gurugram. The plan includes creation of water harvesting structures, pondage areas, channelization of creeks and construction of recharge wells. 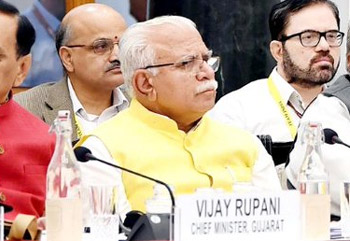 Speaking on the steps for managing any drought situation and relief measures, he said that the preparedness of State administration to provide quick relief to farmers in eventuality of a drought has constantly been reviewed.  Drought and Flood Control Rooms have already been activated in the State from May 20, 2019 onwards.

Mr Manohar Lal said that under the ‘Pradhan Mantri Fasal Bima Yojana’, against Rs. 406.27 crore premium collected from farmers, an amount of Rs. 1140.98 crore has been distributed to the farmers as compensation in the last three years, this is also more than the total premium of Rs. 818.20 crore paid to the insurance companies. Further, adopting a liberal policy, the Government has also given compensation of Rs. 12,000 per acre, for the crops damaged due to natural calamity.

He said that a normal 100 days employment is being provided to one family in the State under MGNREGA, which will be increased to 150 days during drought conditions, if required. Further, drinking water supply will be made available through tankers and other measures to the public, in case of drought situation.

Government is making efforts to fill-up the vacant posts in all the departments. Sanction has been provided to engage Specialist Doctors on a contract basis for providing better health care services.  It has been decided that no government official will be relieved from the district on transfer without the approval of government.

He said that the State Government has also announced the Mewat Water Supply Channel to meet the drinking water needs of Mewat area.  A separate budget of Rs. 30 crore has been provided to Mewat Development Board for various developmental initiatives under the Scheme for Integrated Development of Mewat Area. ‘Haryana Rail Infrastructure Development Corporation Limited’ has undertaken feasibility study for new railway line Sohna-Nuh-Alwar.

Considering the lower quality of water in the district which is fed by Gurgaon canal carrying all the effluents and industrial waste from Delhi, the Government of Haryana is considering setting up a Common Effluent Treatment Plant (CETP) at the point where Agra canal enters Haryana. This will help the area to address its health problems, and in better agricultural output and also drinking water which will further transform the neighboring district in Delhi and Uttar Pradesh. The expected cost of this CETP will be Rs. 500 crore and the contribution from Government of India and Delhi Government and Government of UP will be important.

He welcomed the creation of Marketing of rural agriculture, horticulture and other allied products, which is an important component of the post-harvest management programme.

He said that under the guidance of  Prime Minister, Haryana has already become a Kerosene Free state saving about Rs 300 crore per annum, apart from other economic benefits.  As many as 8,67,615 LPG connections have been given sparing women from the menace of smoke and attendant health hazards. Similarly, the automation of Fair Price Shop with aadhaar verification and Supply Chain Management System with 9500 Depots having gone on-line has resulted in saving of 25 per cent of the cost. The food grains being distributed are reaching legitimate beneficiaries.

He said that the State Government is working in tandem with the Union Government to achieve the target set by Prime Minister to double the income of farmers by 2022 and improve their overall wellbeing.  The seven action points being undertaken in this regard included effective irrigation methods, provision of quality inputs – seeds and fertilizers, prevention of post-harvest losses, promotion of food processing units, creation of e-market, crop insurance and promotion of allied activities – animal husbandry, dairying and fisheries, etc.

An innovative 'Crop Diversification' scheme (Jal Hi Jeevan) envisages diversification of 50,000 hectares area of non- Basmati area into primarily Maize and other crops in identified seven Blocks in various districts. Besides providing maize seed free of cost for sowing and subsidy of Rs 2,000 per acre, the State Government would also bear the expenses of crop insurance. By diversifying the area of non-basmati paddy into maize under this scheme, the total saving of water is expected to be 0.71 crore cm, he added.

The Government has prepared “Horticulture Vision” with an aim to double the area under horticulture from the present 7.5 per cent to 15 per cent and triple the horticulture production in the State by 2030. To achieve these goals, the Government has declared 340 “Bagwani Villages” in 140 Crop Clusters for which a Crop Cluster Development Programme has been prepared for crop diversification and to increase farmers’ income.

He said that the law and order situation in the State is peaceful and under control. Citizens belonging to all religions, castes, classes and regions are living peacefully in harmony and in a cooperative manner. The State Government is committed to ensuring the safety and security of people in the State, and for this several citizens- friendly services have been initiated.

He said that the State Government is committed to work with NITI Aayog to achieve the Sustainable Development Goals (SDGs). Towards this end, we have already prepared a VISION 2030 document, established the SDG Coordination Centre in partnership with UNDP, operationalized the Swarna Jayanti Haryana Institute of Fiscal Management and aligned budgetary allocations towards these goals. Taking a step forward this year, we have also introduced the 'Output-Outcome Framework' in line with national SDG indicators for each scheme under the Budget 2019-20 for Haryana. This serves as the foundation step by providing an integrated framework for aligning public spending towards achieving the SDGs in a phased manner. This framework will facilitate deeper understanding about the Government’s welfare and development activities among all stakeholders and enable departments to keep track of their performance during the year.

He said that Haryana has been in the forefront of implementation of the GST, in its true letter and spirit. As many as 2.25 lakh dealers who were earlier registered under VAT, Central Excise and Service Tax in Haryana, have been successfully migrated to GST. In addition, 2.29 lakh new dealers have been registered in the State up to  March 31, 2019, increasing the total number of registered dealers in the State to 4.46 lakh.  An International Aviation Hub comprising maintenance, repair & overhauling and fixed base operation facilities, Training & Simulation Centre, Aerospace University and Aerospace/Defence Manufacturing Park is being developed in Hisar and is planned to be completed in three phases.

Haryana Government is working according to the principles of ‘Sabka Saath – Sabka Vikas’ – Sabka Vishwas'; and ‘Minimum Government – Maximum Governance’ laid down by the Prime Minister.  As many as 400 State G2C e-Services pertaining to 34 Departments and 12 G2C e-Services of Govt. of India are being delivered through more than 10,000 CSC Atal SevaKendrasand 144 e-Disha Centres across the State. Haryana is ranked number one in e-Services delivery under e-District project along with Gujarat.