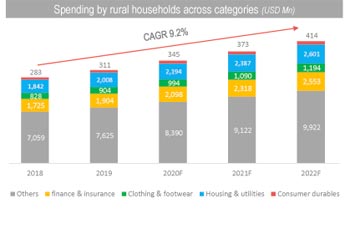 The rural population is forecasted to cross 900 million by 2020 constituting 65% of the total population consumer durable is expected to rise at a CAGR of 10%, provides a massive opportunity for E-commerce/ E-tail business to reach rural India

The advent of the ‘internet’ era in India has brought about a lot of pleasant changes. On one hand where India has become the 2nd largest consumer of the internet in the world, on the other sales of consumer durables and finance schemes have rocketed in the country.

72 Networks which is a PAN India distribution house specializing in last-mile delivery with particular focus on rural areas has come up with their year-end survey on the rise of spending in rural areas across different sectors.

According to the research, the rural population is forecasted to cross 900 million by 2020, constituting 65% of the total population, i.e. 1354 million. The urban population comprises of only 35% of the cherry with a combined population of 461 million.

The study also indicates that the spending of rural households across sectors has grown dramatically over the years. Housing & Utilities is the segment in which the rural population have shown their maximum interest with a combined investment of 2610 million USD followed by the Finance & Insurance segment with a combined investment of 2553 million USD. The other sectors to support this suit are the Clothing & Footwear segment with 1194 million USD and Consumer Durables with 414 USD.

This is the era where OEM’s like Samsung, Xiaomi, Nokia etc. have entered a steep competition in a billion-dollar Indian market where the average middle-class consumer is growing day by day. They are investing a lot of money in their distribution channels as they want to reach out to the remotest corners of India. The complexity of the situation can be judged from the fact that the e-commerce giants like Amazon, Flipkart etc. are spending millions to enhance their last-mile delivery process but still are far away from it.

Meanwhile, 72 Networks which is a PAN India distribution house specializing in last-mile delivery with special focus on rural areas. They have access to a consumer base of around 150 million Through Microfinance Companies like BFIL, Spandana, Fusion etc. and till date, they have made over 2,00,000 individual rural deliveries across the country. They have closed the FY 2018-19 with a positive top line of INR 70 crores. They have also tied-up with OEM’s like Samsung, MI, Nokia, Singer, Delight etc. and are providing alternate sales channels for their first sales. This is not only providing the OEM’s with an extensive reach to rural India but is also opening up multiple avenues for market growth.

Bangladesh is the top destination for wheat exports; Yemen, Afghanistan, Qatar and Indonesia new markets for Indian wheat in 2020-21

2021 a tough year for the eye healthcare sector in India, expected to register recovery in 2022