Govt. wants the CPSEs to double their contribution to the GDP 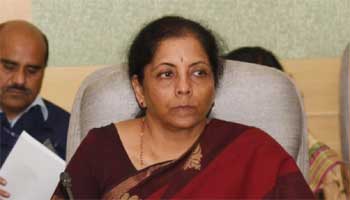 INVC NEWS
New Delhi,
Union Minister for Finance & Corporate Affairs Nirmala Sitharaman met here today  the top brass of the Maharatna and Navratna Central Public Sector Enterprises (CPSEs) to review their capital expenditure till date and plans for the next two quarters of this financial year. This meeting was held as part of the series of meetings that the Finance Minister has been having with various stakeholders and the measures that have been taken to accelerate the economic growth rate. The Meeting was attended by Finance Secretary  Shri Rajeev Kumar , Secretary DEA Shri Atanu Chakraborty & Secretary Expenditure Shri GC Murmu & Heads /Representatives  of 32 CPSEs .

The combined capital expenditure by the Central Public Sector Enterprises (CPSEs) and Departmental Undertakings (DUs) such as the NHAI and the Indian Railways contribute in substantial measure to fixed assets creation in the economy.

Government has introduced performance-based evaluation and has also empowered the Boards of Maharatna and Navratna companies for taking operational decisions. Government wants the CPSEs to double their contribution to the gross domestic product (GDP) and be the “third major source” of revenue for the Centre after direct and indirect taxes. CPSEs must make efforts to reduce the country’s imports bill and expanding India’s global strategic reach by 2022.

A major transformation has taken place in the last few years in the way procurement is made in the Government by setting up Government e-Marketplace (GeM) and the Central Public Procurement Portal. This allows procurement to take place in a completely paperless, cashless and system driven e-market with minimal human interface. These platforms help in not only making public procurement efficient and accountable but also enhances resource efficiency.

The Finance Minister stressed that CAPEX needs to be given a vigorous push in the next two quarters. Therefore, CAPEX plan has to be firmed up and followed up with ground level execution. Ministry of Finance would monitor the capital expenditure regularly. CPSEs must ensure that regular payments are cleared expeditiously as it spurs investment cycle and establish e-Billing portal for enabling stakeholders to track the status of payments. Special efforts must be made to clear dues of MSMEs and resolve cases on the SAMADHAN portal of Department of MSME.