INVC NEWS Haryana, Haryana Chief Minister Manohar Lal said that the State Government is spending crores of rupees on strengthening and increasing the capacity of the electric power infrastructure to ensure uninterrupted power supply across the State.

The Chief Minister was speaking after laying the foundation stones of two 33kV sub-stations in Karnal today. These sub-stations would be constructed at a cost of about Rs eight crore.

Reiterating the commitment of the State Government towards providing uninterrupted power supply, he said that several initiatives had been taken in this direction. New sub-stations are being established and capacity of existing sub-stations is being increased, he added. He said that the capacity of the main 220kV power station on Kunjpura Road had been increased to give relief from permanent power cuts. Following this, the uninterrupted power supply has been commenced in the rural area along with the city. 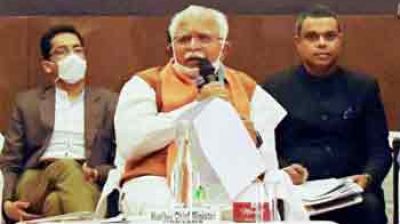 We will always be proud of our martyrs