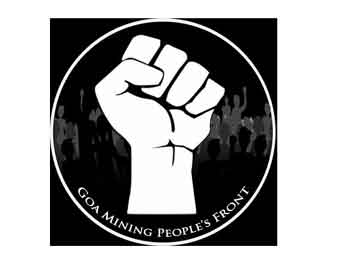 Accuses Goa Foundation of their starvation

Goa Foundation should stop playing ‘B team’ to foreign forces who have interest in Goa Mining.

Goa Mining People’s Front (GMPF), representing the cause of lakhs of people gainfully employed in the mining industry in the state of Goa today, criticised Goa Foundation, a Goa based NGO for creating muddle in Goa Mining matter which is on halt from past 32 months. The outburst of COVID-19 pandemic has further intensified the tragic economic condition of the state in a precarious condition. With state borrowing standing at an all-time high, the amount of debt has been further increased in last 3 years. Mining has been stopped in Goa from March 15, 2018 after the Apex Court of India quashed 88 mining leases in the state.

Mr. Puti Gaonkar, President, GMPF today said, “The state of Goa has lost third consecutive mining season which has incurred a loss of Rs. 3,500 to the state revenue because of continuous misrepresentation of facts by Goa Foundation. The NGO doesn’t represent the mining dependents of Goa. All of us are looking eagerly for swift resolution of the Mining issue in the State and are hopeful towards the upcoming Supreme Court Hearing and hope that Goa Foundation does not further delay the process on some flimsy grounds. ”

“The Government is delaying to bring about the solution to restart mining using the excuse of NGO’s negative role.    Goa Foundation should stop playing as ‘B team’ to certain foreign forces having interest in Goa Mining. The woes of mining dependents are increasing each passing day .The NGO has been misleading everyone by claiming that state mining corporation will be a cake walk success knowing fully well that state corporation is not practical for operational leases. They are carrying on the agenda without having any thought towards the livelihood of people who are engaged in mining industry. Recently the NGO themselves admitted that it would take further 3 years for mining to resume in the State, can they shed light as to how they propose to  provide livelihood to us during these 3 years. We hope that their action plan if any should be viable and implementable and not impractical as their previous suggestions. Action must be initiated against NGOs like Goa Foundation for misleading the people and the policy makers and causing immense harm to the interest of the people of the state”. Added Mr. Gaonkar.

Nearly 60,000 directs jobs have been lost due to mining closure and the mining dependent people are in distress even for earning their livelihood. With the Supreme Court hearing continuously rescheduling and issuing of new ones, agony of mining dependents is roaring at its most.

Mr Chandrakant Gawas, Member of GMPF added “Recently Dr Claude Alvares spoke about the Spread effect of tourism industry on the Goan Economy. Similar spread effect was also prevalent in the mining industry, Not only employees, but truckers, machinery owners, barge owners and crew, small tea shops, garages all were deriving livelihood from this industry. From their earnings they used to further spend money in the market place which was giving huge boost to the State’s economy the same has stopped. The Co-operative banking sector in Goa has collapsed due to NPA’s arising from the Stoppage of Mining Industry which was earlier thriving from income from Mining Industry. While the national and Big private banks are hesitant to finance the mining dependents for alternate vocations.

Its imperative that mining resumes in the State of Goa resumes so that the future of Goa’s generation is protected. The NGO's actions have put people in distress as they object to mining without any regard to employment and livelihood opportunities for Goans. People in the mining belt are suffering for last 8 years and the basic livelihood sustenance has been inconsistent for quite a long time.”

The Mining Industry in the State of Goa has always had a symbiotic relationship with the community and have co-existed for the last 6 decades. The Mining industry prior to its shutdown in March 2018 provided livelihood roughly to around 3,00,000 people in the State either through direct employment or indirectly. According to the recent report Centre for Monitoring of Indian Economy (CMIE) unemployment rate in Goa stands high at 15.9%. The shutdown of tourism industry for at least a year would further aggravate the unemployment rates in State.

Role of NGOs in early childhood care and education

People have started coming out and roaming around as if...