New Delhi, Building on the momentum being created globally to end tuberculosis, world’s top infectious killer disease, leaders from across the globe are converging here for an End TB Summit beginning 13 March to review ongoing efforts and accelerate action to reach 2030 End TB goal. Hosted by the Ministry of Health and Family Welfare, Government of India, the World Health Organization and the Stop TB Partnership, the Delhi End TB Summit 2018 will be inaugurated on 13 March by the Prime Minister of India, Mr Narendra Modi, and addressed by the WHO Director-General, Dr Tedros Adhanom Ghebreyesus, the Minister of Health and Family Welfare, Mr J P Nadda, and Dr Aaron Motsoaledi, Chair of the Stop TB Partnership. The WHO Regional Director for South-East Asia, Dr Poonam Khetrapal Singh, the Stop TB Partnership’s Executive Director, Dr Lucica Ditiu and Global Fund’s Executive Director, Mr Peter Sands, would be among the prominent health leaders at the meeting. The health ministers of a number of countries including Indonesia, Bangladesh, South Africa, Nigeria, Mozambique, Zimbabwe, Kazakhstan, Peru and Brazil are also expected to participate. TB was responsible for 1.7 million deaths in 2016, despite most cases being curable. Over 10 million people contract TB every year. WHO South-East Asia Region, which hosts about one-fourth of the global population, shares a disproportionate 46% global TB disease burden. The Delhi End TB Summit builds on the Delhi Call to Action adopted by Member countries of WHO South-East Asia Region in March 2017, and the WHO Global Ministerial Conference “Ending TB in the Sustainable Development Era: A Multisectoral Response,” held in Moscow in November last year. The summit next week will set the stage for the September 2018 United Nations High-Level Meeting on TB. For the first time TB will be discussed in the UN General Assembly at the Heads of State level. The UN high-level meeting is expected to endorse an ambitious set of goals to put the world on course to ending TB. Till date there have only been five UN high-level meeting devoted to health issues. As part of next week’s summit, health ministers and programme heads from WHO South-East Asia Region will review accelerated efforts being made by countries since the adoption of Delhi Call to Action. The Regional Director, Dr Poonam Khetrapal Singh, had announced ending TB as a flagship programme in the Region, at the Delhi Call to Action. Since then, countries in the Region have beefed up efforts to end TB.  India, which had set a 2025 target, is matching it up with increased funding and efforts to proactively detect and treat patients. Sri Lanka is also aiming at ending TB by 2025. Bhutan is focusing efforts at the sub-national level. Indonesia is moving towards universal use of rapid molecular tests to diagnose and treat missing TB cases. While Thailand has approved a strategic plan to significantly reduce TB incidence, Maldives recently launched its national strategic plan. Stop TB Partnership is continuing its global, regional and country advocacy work in addition to the support offered to country programmes and partners towards a TB free world. On 14-15 March, the Stop TB Partnership will hold its  board meeting, which is being hosted in India after 14 years, demonstrating the country’s resolve to fast-track efforts to end the killer disease.
Read the full article
Tags: WHO Director-General Dr Tedros Adhanom Ghebreyesus

20 million children miss out on lifesaving measles, diphtheria and... 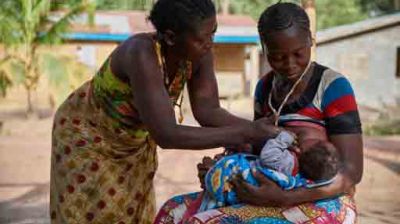 3 in 5 babies not breastfed in the first hour...