Shri Shah, praising the work done by NHRC, said that the organization had, over the last 26 years, created immense awareness about human rights in people. He added that the concept of human rights as applied in India was very different from that as applicable globally. He remarked that this was so because traditional Indian social structures and institutions have been the inherent protectors of several human rights, without any legal obligation needed to enforce this protection. He said that this shows the richness of our culture, and that protection and promotion of human rights has always been an indelible part of our culture. He said that ensuring synergy between our cultural values and the modern approach to human rights would make India the best in the world in terms of human rights.

Shri Shah said that Gandhi ji's principles and values encompassed a wide scope of human rights and added that his favorite devotional song Vaishnava Jan To is one of the greatest charters of human rights. Shri Shah hailed the rich literature and philosophy of human rights present in Indian culture. He urged the NHRC to provide a platform to showcase such examples.

Shri Shah remarked that poverty and violence were major challenges to human rights and said that any step taken to eliminate poverty will immediately enhance India's standing in the field of human rights. He added that the government of Prime Minister Shri Narendra Modi has successfully begun to address the problem of poverty in the larger context of provision of human rights. He denounced homelessness, lack of basic amenities and lack of access to healthcare as violations of human rights. He added that after 2014, for the first time, under the leadership of Prime Minister Shri Narendra Modi, the government has begun tackling these challenges with great focus. He said that this effort needs to be showcased to the world, and hailed it as the biggest effort globally to protect and promote human rights.

Remembering the 40,000 victims of terrorism in Kashmir, Shri Shah called terrorism and Naxalism the greatest violations of human rights. While emphasizing on zero tolerance towards custodial deaths and police atrocities; he spoke for the protection of human rights of the victims of terrorism and those who have been unable to enjoy the fruits of development because of the violence inflicted by Naxalism and terrorism.

Shri Shah praised the rich intellectual tradition of India's Constituent Assembly debates, and said that those debates enliven the concept of human rights and the spirit of the Constitution. He said that the various legal provisions to enact the Directive Principles and Fundamental Rights as enshrined in the Constitution, such as  Rigjt To Education, Right To Information and Right To Food are all connected to the advancement of human rights and that the protection and promotion of human rights is a cornerstone of India's Constitutional philosophy. Shri Shah said that the recent Amendment to the Protection of Human Rights Act has expanded the scope of the Act and made it more inclusive in the spirit of Paris Principles.

Shri Shah expressed pride at NHRC being accorded the status of an International Human Rights Institution and praised the work done by NHRC in various fields associated with human rights. He congratulated NHRC as well as civil society for the steps taken by them to advance the cause of human rights in the last 26 years. Shri Shah said that under the leadership of Prime Minister Shri Narendra Modi, the Government would act as a proactive sentinel of human rights for every citizen, regardless of a law to mandate the same. 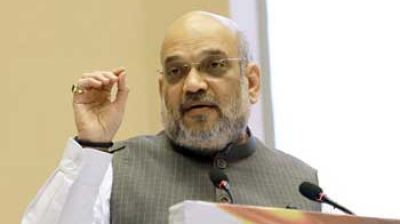