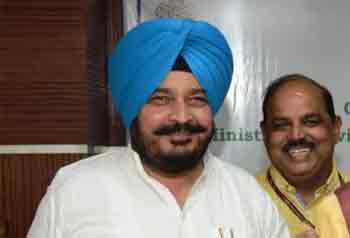 INVC NEWS
Chandigarh,
Forests, Social Justice, Empowerment & Minorities and Printing & Stationery Minister Mr. Sadhu Singh Dharmsot on Monday, said that the Punjab Government managed to clear the illegal encroachments at 18946 acres of forest area thereby resulting in an overall increase in the forest cover in the state by 2872 Acres.

The Minister, while addressing the press conference at Punjab Bhawan here, said that the Punjab Government led by Chief Minister Captain Amarinder Singh was firmly committed to promote greenery in the state and was taking appropriate and effective steps in this direction.

Mr. Dharmsot applauded the efforts of the officers and employees of the forest department who in collaboration with the district administrations on the guidelines of the state government managed to clear the forest land from illegal encroachments.

He said that according to the latest Forest Cover Report released by the Government of India, the forest area of the state has increased by 2872 acres which shows that the programs implemented by the state government are moving towards success.

Forest Minister Mr. Dharmsot said that the department has planted over 77 lakhs indigenous varieties of saplings in 12986 villages of the state and established 432 ‘Nanak Bagichis’ with the cooperation of public to mark the 550th Parkash Purab of the First Sikh Guru Nanak Dev Ji. He said that similarly to commemorate the 400th Birth Anniversary of Guru Teg Bahadur Ji 60 lakh saplings planted in the state.

He said that during the regime of present Captain government saplings were planted under the `Puncampa’ scheme over the lands measuring 34988 acres besides providing subsidies to the 1292 farmers of Kandi areas worth Rs. 8.29 Crore for fencing work, therefore enabling them to protect their crops from the wild animals. Similarly, in the last four years under the agroforestry scheme, a subsidy of Rs. 10 Crore over 115.96 Lakh saplings has been transferred in the Aadhar linked bank accounts of 10204 farmers.

Mr. Dharmsot said that under the `Ghar Ghar Hariyali’ scheme started in the year 2018-19; people have received as many as One crore saplings free of cost from the department’s nurseries of which 41.5 Lakh plants were distributed through the `I-Haryali’ app. Further, in the year 2020-21 under Puncampa and Green Punjab Mission Scheme, plantation of over 4897 hectares of land were carried out adding he said that during the same period the benefit of agroforestry scheme was extended to 1185 farmers with plantation of 14.37 Lakh saplings over the 1783 hectares of land, whereas a total of 9.97 Lakh plants were distributed under `Ghar Ghar Hariyali’ scheme.

He said that Beas, Keshopur, and Nangal wetlands were announced as international-level RAMSAR sites besides the induction of ChhatBir zoo as a member of the World Association of Zoo & Aquariums.

Sharing the roadmap of the development projects for the year 2021-22, Mr. Dharmsot said that the department has proposed to plant saplings over 19125 acres of land under the ‘Puncampa’ and ‘Green India Mission’ schemes. He mentioned that the department would plant as many as 30 lakh saplings under the agro forestry scheme besides distributing 15 lakh free of cost plants under the ‘Ghar-Ghar Hariyali’ scheme. Similarly, under the city forest scheme, the proposal for four sites including Pathankot, Bathinda, Mohali, and Patiala with an outlay of 607 lakh was finalized and further sent to the Government of India for final approval, he added. The Minister said that to benefit the farmers of the Kandi area with fencing facilities, a project at Rs. 775 Lakh under the National Agriculture development scheme was prepared and sent to the agriculture department, Punjab.

During the press conference giving information regarding the Social Justice, Empowerment and Minorities department, Mr. Sadhu Singh Dharmsot said that during the year 2020 as many as 10873 girls belonging to Scheduled Castes had been given the benefit to the tune of Rs. 22 crore under Ashirwad Scheme while Rs. 17 crore was disbursed to 8209 girls from Backward Classes and economically weaker families at the time of their marriages.

The Minister pointed out that the Punjab Government notified its own new Dr. B.R. Ambedkar SC Post Matric Scholarship Scheme on October 27, 2020, which had been applicable from the academic session 2020-21. The benefit of this scheme would be given to those candidates of Scheduled Castes, who passed matriculation from Punjab State and Chandigarh. Under this scheme the income limit (both of mother-father) had been enhanced from Rs. 2.50 lakh to Rs. 4 lakh. The ambit of benefit under the scheme had also been expanded to Central and State level institutes of higher education of Punjab and Chandigarh.

Mr. Dharmsot also informed that the SC Land Development and Finance Corporation had given loans worth Rs. 5.59 crore to 417 beneficiaries along with subsidies under self employment schemes. Likewise, the Backward Classes Land Development and Finance Corporation provided Rs. 3.91 crore to 228 beneficiaries under self employment schemes. The Punjab Government has already cleared an amount of Rs.52 crore to give debt waiver by Rs. 50 thousands to 14260 people hailing from Scheduled Castes and 1630 Backward Classes.

Mr. Dharmsot stated that during the New Year 2021, the department has sent a proposal to the finance department to waive off loans up to Rs. Two Lakh belonging to SC/BC youths adding another plan was under consideration to increase financial aid to the daughters of the economically weaker section under Ashirwad scheme to Rs. 51,000 from the existing amount of Rs. 21,000.

While highlighting works done by the printing and stationery department, Mr. Dharmsot said that Government Press Mohali and Patiala printed several books, magazines, registers and forms for various departments and electoral material for the elections department as well. He added that apart from 1 lakh wall calendars and 21,000 deluxe diaries, the press also supplied ‘Badalda te Vadhda Punjab’ magazine and awareness literature under Mission Fateh to Information and Public Relations department. He said that the department has also printed 500 coffee table books regarding 550th Parkash Purb and several secret documents for various departments.

He said to enhance the efficiency of the government printing press, the department has also sent a proposal to the finance department for installation of modern technology machines.