Home Other Agriculture FM Sitharaman to review the progress in issuance of KCC to poor... 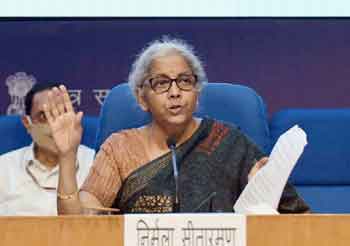 Shri ParshottamRupala, in the meeting held yesterday, suggested a few measures for compliance by the Banks viz., all Banks must follow the Guidelines of KCC properly, the due acknowledgment for KCC application should be given to the applicants and a timeline decision on the application should be fixed. He added that the reasons for rejection should be clearly indicated so that field officers could rectify and re-submit the forms. The Minister suggested that KCC should be given to people from Maldhari (Ghumantu) Community, who do not stay in one place and have no collateral security to offer. He further said that KCC should be given to poor fishermen who are unable to give any collateral. The Minister said that these efforts should aim at accelerating the efforts of Ministry of Fisheries, Animal Husbandry and Dairying in full saturation of KCC in the country.

The Government of India in the Budget-2018-19 announced the extension of the facility of Kisan Credit Card (KCC) to fisheries and animal husbandry farmers to help them to meet their working capital needs. The KCC facility will help fisheries and animal husbandry farmers to meet their short-term credit requirements of rearing of animals, poultry birds, fish, shrimp, other aquatic organisms and capture of fish.

Departmentof Fisheries is trying to explore the possibility of extending KCC to the fishermen who are not covered at present such as those who do not own/lease boat or assets etc. States/ UTs is advised by the DoF to regularly monitor the progress of saturation of eligible fishers and fish farmers under KCC and follow up action must be taken with the concerned banks for removing shortcomings and ensure early sanction of KCC.

Progress of ongoing Nationwide Fishery KCC Campaign, as reported by DFS on

24.06.2022 as well as the applications received before the said Campaign:

Facility of Kisan Credit Card (KCC) has been extended to Animal Husbandry farmers in 2018-19. This ensures short term credit for meeting their requirements for working capital – feeding, veterinary aid, labour, water and electricity supply etc. A Special Drive was organized from 1st June to 31st December 2020 by this Department for providing KCC to eligible dairy farmers of Milk Cooperatives & Milk Producer Companies. Before this drive only around 30,000 KCC were sanctioned to Animal Husbandry and Dairying.During this period more than 50 lakh applications were sourced, out of which 18.81 lakh fresh KCC were sanctioned.

The Consolidated progress of the campaign is given as under;

KCC. The portal is almost ready for launch.This portal will facilitate online submission, processing and monitoring. Banks are requested to facilitate API integration with their banking system for this portal which will enable real time monitoring.