Final gift will be given by the people of India on October 2nd, 2019 : Venkaiah Naidu

Union Minister of Rural Development, Drinking Water & Sanitation and Panchayati RajShri Narendra Singh Tomar and Chief Minister of Gujarat, Shri Vijay Rupani, today declared the birthplace of Mahatma Gandhi – Porbandar district – Open Defecation Free (ODF). The announcement was made during a mass rally in Porbandar to dedicate this declaration to the memory of the Mahatma on his 147th birth anniversary, and the second anniversary of the Swachh Bharat Mission (SBM). The rally began from Sudama Mandir and culminated at the event venue, the Nagar Palika Party plot, Chaupati, Porbandar. Two other districts of Gujarat – Mehsana and Narmada – were also declared ODF today, along with 30 taluks and 3000 Gram Panchayats in the State. Speaking on the occasion, Shri Tomar said that the nation today witnessed a historic moment as the birthplace of the Mahatma was declared ODF on his Jayanti. He also mentioned that he felt honoured to also declare the birthplace of the Prime Minister, Shri Narendra Modi – Mehsana district – on the 2nd anniversary of Swachh Bharat Mission, the Prime Minister’s flagship programme which he is leading from the front across the nation. He thanked the Prime Minister for launching the Swachh Bharat Mission and thanked the Chief Minister of Gujarat for taking it forward in such a big way in his State. He expressed complete faith in the government and people of Gujarat that they would achieve a 100% ODF Gujarat well before October 2nd, 2019. He also said that it gave him immense pleasure to announce that 1 lakh villages and 37 districts of the country are now ODF. He said that this was proof that Swachh Bharat had truly become a jan aandolan (people’s movement). With focus on behaviour change rather than simply construction of toilets, he said he felt confident that the Government of India and the people of India would achieve the goals of the Swachh Bharat Mission by October 2nd, 2019. The Chief Minister, Shri Rupani, said on the occasion, that the communities those are most aware of the importance of ending open defecation in Gujarat are women and senior citizens. He said that young girls have started demanding a toilet in their in-laws’ place before getting married. He mentioned the initiative going on in the State whereby people of the village gift flowers to those continuing to defecate in the open, as a gesture of shaming by Gandhigiri. He said that Swachh Bharat Mission in Gujarat had, in this way, truly become a jan aandolan. Thanks to the participation by the people, sanitation coverage in Gujarat currently stands above 80%, up from 59% in 2014-15, and 11 districts in the State have achieved 90%-plus coverage, he added. The Union Minister for Urban Development, Shri M Venkaiah Naidu also addressed the event via video conferencing. He said that by making Porbandar 100% ODF, the people of Gujarat have given an interim gift to Mahatma Gandhi. He said that the final gift will be given by the people of India on October 2nd, 2019 by making the entire country Swachh. Celebrations of the 2nd anniversary of SBM were held across the country today, with ODF declarations and mass mobilisation activities in many parts of the country’s including in towns and villages. Special Swachhta events with community participation have been held at the 10 iconic places which have been taken up for higher cleanliness standards by the Government of India under SBM.
Read the full article
Tags: Venkaiah Naidu Final gift will be given by the people of India on October 2nd 2019 : Venkaiah Naidu 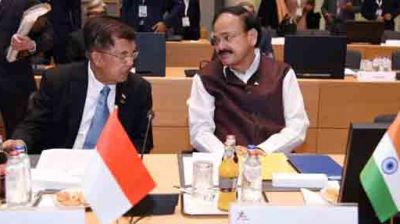