Home Other India Every farmer is the same and every person irrespective of their gender... 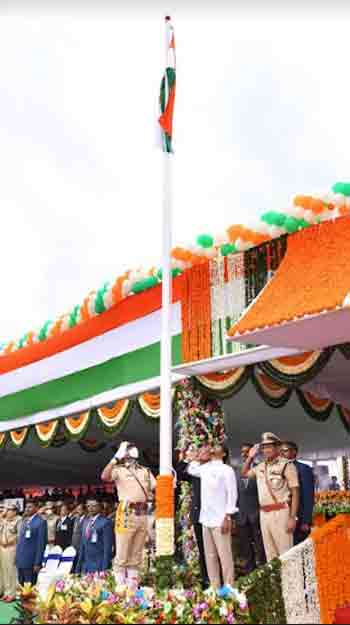 The CM Jagan Mohan Reddy noted that the National Flag hoisted today was the embodiment of our freedom. It is a symbol of our great democracy and the sovereignty of the people of the country. The National Flag is also a symbol of India’s spirit and our self-respect. The CM Jagan Mohan Reddy added that even though India has achieved a lot as a country on an international pedestal, it doesn’t seem like the country is truly attained independence. While there is social injustice and societal inequality, the rule in Andhra Pradesh in the last three years has solved these issues.

“Some of these struggles are social reform struggles, while a few others are equal rights struggles. This truth cannot be hidden. Corrections have to be made and our three-year rule in Andhra Pradesh is the search for such answers. I am proud to inform you that we have been able to answer these questions born out of the experiences of many communities for decades and the injustices done to them,” CM Jagan Mohan Reddy, said.

Highlighting the reforms brought about in the last three years to find answers for the problems lingering in the state, CM Jagan Mohan Reddy said that in almost all sectors, the government has put in effort to curb the inequalities and deliver to the people.

“We have brought many governance reforms, laid great emphasis on social justice, provided 40,000 new jobs in three years, brought change in civil services, pension is being delivered to the doorstep of people on the first day of every month. The SC, ST, BC and minority communities have been given a lot of attention. All of this being done without looking at the caste, creed and religion. This is our fight against social injustice in the state,” CM Jagan Mohan Reddy, highlighted.

Speaking of equality, Chief Minister Jagan said that every farmer is the same and every person irrespective of their gender is the same.

“The government has worked to aid the farmers in every possible way. Services such as seed purchase and crop sale have been made easier for farmers with the setting up of RBKs. We are providing farmer insurance to the farmers and in total, we have spent 1.27 lakh crores for farmer’s welfare,” CM Jagan Mohan Reddy, said.

In fact, women empowerment has been the focus for the government from the start and efforts have been made to uplift them.

“Women play an important role in the society and everyone’s lives. We ensured education for all under Amma Vodi by providing financial assistance to women.  Ours is the only government that has provided 50 percent reservation for women,” CM Jagan Mohan Reddy, noted.

With the stern belief of bringing out revolution in the state, CM Jagan Mohan Reddy said that the regional aspirations, and regional self-respect require a balance of all regions. He also added that the government is taking steps with the firm belief that this is the foundation for a strong bond in the state and to find more answers to the existing questions and find solution.