Home Other Investigation News Elections are the festival of democracy and fair and fearless elections and... 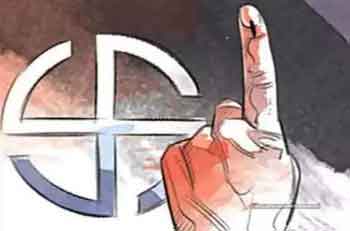 The Union Minister for Home and Cooperation, Shri Amit Shah attended the 83rd Raising Day celebrations of the Central Reserve Police Force (CRPF) in Jammu today as the Chief Guest. On this occasion, the Union Home Minister also inspected the parade. Several dignitaries including the Lieutenant Governor of Jammu and Kashmir, Shri Manoj Sinha, Union Minister Dr.Jitendra Singh and the Union Home Secretary were present at the function. This is the first time that the CRPF is celebrating its Raising Day outside Delhi. 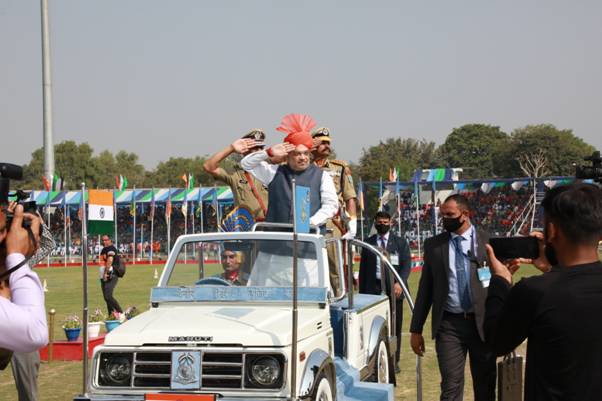 In his address, the Union Home Minister said the Government of India has decided that annual parades of all Central Armed Police Forces (CAPFs) will be held in different parts of the country. This is so that all the CAPF organizations engaged in the country’s borders and internal security, should go to different parts of the country and build good relations with the people and mix with the culture of various regions of the country and as always dedicate themselves to duty. As part of this decision, the annual parade of the CRPF was organized in the historic city of Jammu today.

Shri Shah said ,it was from Jammu & Kashmir that Pandit PremnathDogra and Shyamaprasad Mukherjee had protested saying that Kashmir is an integral part of India, two chiefs, two insignia’s and two legislations cannot exist in our nation. Under leadership of Prime Minister Shri Narendra Modi, the dream of one chief, one insignia and one legislation, both of which were dreams of Shyama Prasad Mukherjee and Pandit Premnath Dogra, have been fulfilled. 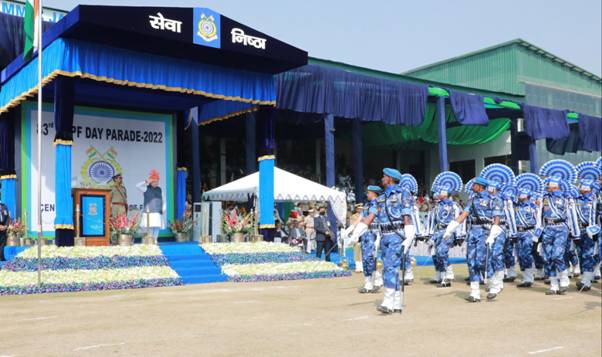 The Union Home and Cooperation Minister said that since the raising of the CRPF, till date 2,340 of its personnel have made the supreme sacrifice.I would like to pay humble tributes on behalf of the entire nation to the CRPF jawans who have made sacrifices, first while protecting the country’s borders and later the country’s internal security, fighting naxalism and terrorism and dealing with riots.Whenever India’s history is written, the supreme sacrifice of these 2,340 personnel will be written in golden letters.I want to say to the families of those who have received posthumous honours that the martyrdom of your son, husband or brother will never go in vain and the nation will remember their martyrdom for ages to come.

The Union Home Minister said that CRPF has established the tradition of considering the security of the country and its countrymen above itself, I am sure that the jawans of the force will carry forward this tradition with the same dedication.CRPF is not only a CAPF, as even the youngest citizen of the country appreciates its spirit of dedication and sacrifice.Whatever the situation, as soon as CRPF personnel are sent, the people believe that now the CRPF will handle the situation and this belief is based on years of hard work and the glorious history of the force. 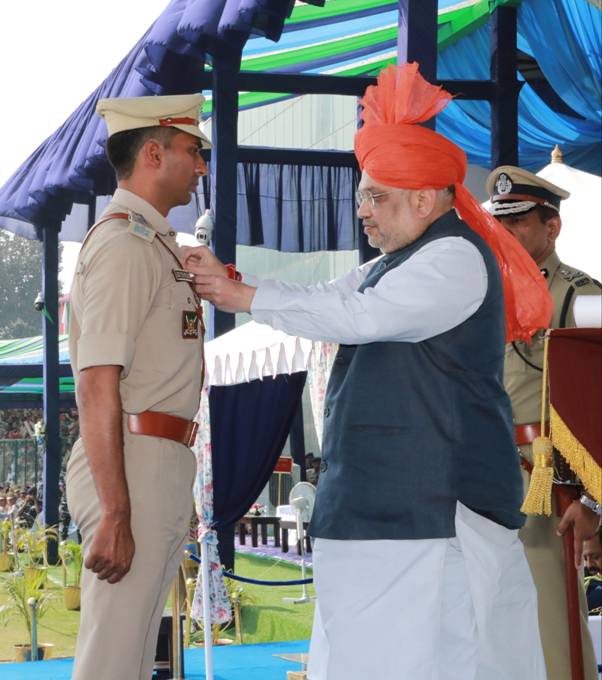 Shri Amit Shah said that whether it be in Naxal affected areas, facing Pakistan-inspired terrorists in Kashmir or restoring peace by eliminating groups that create unrest in the Northeast, the CRPF has played a commendable role in these three areas. On this day in 1950, the country’s first Home Minister and Iron Man, Sardar Patel gave CRPF its colours. Today, the CRPF is the country’s largest armed force with 246 battalions and 3.25 lakh soldiers, whose credibility is recognized not only in the country, but by all Armed Forces in the world.

The Union Home and Cooperation Minister said today on its Raising Day, how can we forget Hot Springs, when on October 21, 1959, the Chinese army attacked and CRPF personnel, despite being in very small numbers, bravely fought the Chinese,  for every inch of the country’s land and sacrificed their lives.That is why by celebrating  October 21 as Police Day, all police forces in the country re-dedicate themselves to the internal security of our nation, by taking inspiration from the valour and sacrifice shown by CRPF personnel at Hot Springs.On April 9, 1965, when the Sardar Post in Kutch was attacked by a Pakistani Infantry Brigade, CRPF personnel were also there and they fought till the last drop of their blood and made the supreme sacrifice in trying to save our territory.Both these incidents are written in golden letters in India’s history and the CRPF and the nationshall always be proud of both these incidentsthat is why we celebrate 9th April as Shaurya Diwas. 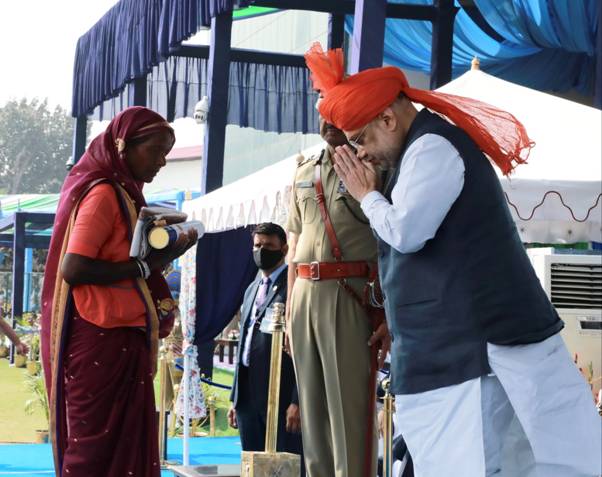 The Union Home Minister said that there was a time when violence was at its peak in the 1990s in Naxalismaffected areas, the North East Theatre and Pak-sponsored terrorism in Kashmir and there was concern amongst citizens due to the internal security situation as to what would the nation’s be. But in a span of two decades,be it the Naxalaffected areas, the North East, Kashmir, showing its strong will everywhere, the CRPF has moved towards defeating the forces that are trying to weaken the country. He said that elections are the festival of democracy and fair and fearless elections and fearless expression of vote is the soul of elections. Whether it is Assembly elections, or Lok Sabha elections, if there is any armed force performing the biggest duty in the, then it is the CRPF. The CRPF also makes the biggest contribution in safeguarding democracy in the country, as any democracy cannot keep itself strong without fearless elections and voting in a fearless manner.

Shri Amit Shah said there was a time when fierce riots used to take place across the country, but after the establishment of Rapid Action Force (RAF) new methods of controlling riots with minimum use of force have been developed. The RAF’s tenacity is as it should be, but the RAF has succeeded with confidence through the new art of pacifying rioters with the least use of force. If we look at the history of riots in the country, it will be seen in two parts, riots before and after the creation of the RAF I can definitely say that after the creation of the RAF, it has been successful in reducing riots in the country to a great extent. The RAF also launched a campaign to train State Reserve Police force, due to which both the RAF and State Reserve Police forces work together in harmony, which has yielded very good results.

The Home Minister said that this is the year of the AzadiKaAmritMahotsav and the Prime Minister has set a goal before 130 crore people of the nation that when we  celebrate the Centenary of independence India should be at a prominent place in the world. Our Prime Minister has set a target of US $ 5 trillion economy before the nation.I believe that the goal of US $ 5 trillion economy can be achieved only when the nation’s internal security is strong and CRPF has a big role.CRPF should draw a roadmap for the goals to be achieved in the AzadiKaAmritMahotsav, by looking at challenges ahead and a strategy to assimilate developing and available technologies so that it can make its force the most modern, capable and effective armed force.

The Union Home Minister said Security forces have achieved a big success by securing a decisive control over terrorism in Jammu and Kashmir.Industrial development has also begun and the Jammu and Kashmir administration has been successful in receiving investment on the ground of more than Rs. 33,000 crore. Work is progressing rapidly to complete all the aspects of the Prime Minister’s package and to provide water and electricity to every household, to create an effective system to tackle COVID-19, to build toilets in every household, to deliver Ayushman Bharat cards to every household, J&K has achieved complete success in all these schemes.Records have been broken in road construction, as work in this area has been done at the fastest pace since Independence in the past 5 years.Seven new medical colleges have been built, two AIIMS have been built, 21 hydroelectric schemes have been started.The Jammu and Kashmir government has achieved big success in bringing in transparency in every field.For the first time after independence, the Jammu and Kashmir administration has brought about  a transformation by launching a massive campaign against corruption in two ways; by giving advice to corrupt people and by devising ways to end corruption in administration.

Shri Amit Shah said the nation is always proud of the CRPF. Today is the Raising Day of CRPFand this force of 3.25 lakh jawans should rededicate itself to internal security and the security of the nation and resolve to carry forward the great history of the CRPF.