Home literature world Book Elected representatives must remember that “they cannot disrespect the parliament and degrade... 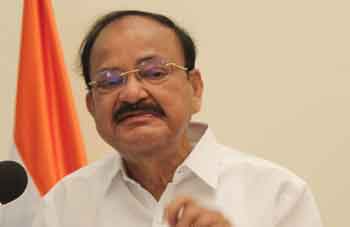 The Vice President, Shri M. Venkaiah Naidu today called for an objective re-evaluation of Indian history through better fact-based research. Suggesting that the colonial perspective of India’s past has distorted facts, he called for a fresh approach to Indian history, with more books on Indian freedom fighters and leaders.

Shri Naidu called upon the youth to study various facets of India’s freedom struggle and imbibe lessons from the lives of freedom fighters. He urged them to overcome the ‘divide and rule’ mindset that was ingrained in the minds of Indians during the colonial rule and contribute towards nation building.

Releasing the book ‘Gandhitopi Governor’ by the Chairman, Official Language Commission, Andhra Pradesh, Shri Yarlagadda Lakshmi Prasad at Upa Rashtrapati Nivas, the Vice President stressed the need to bring out more books on freedom fighters in different Indian languages as the country celebrates ‘Azadi ka Amrit Mahotsav’. He called upon the states to take the lead in this regard and publish books on leaders from their respective regions.

On this occasion, the Vice President paid rich tributes to Shri Edpuganti Raghavendra Rao, prominent freedom fighter, legislator and Governor of Central Provinces in the British administration. The book chronicles the life of Shri Rao.

He recalled that Shri Raghavendra Rao, even while working in the British government, continued his struggle for self-governance and Swaraj. As a governor, he also promoted khadi by using it himself and served as an exemplar for others.

Referring to exemplary values upheld by Shri Raghavendra Rao in public life, Shri Naidu suggested that law makers of today need to introspect and emulate the high standards set by our freedom fighters and constitution makers. Referring to some recent instances, he said elected representatives must remember that “they cannot disrespect the parliament and degrade democracy”.

Shri Naidu appreciated the efforts of the author, Shri Yarlagadda Lakshmi Prasad and the publisher, Shri Vijay Kumar for their efforts in bringing out the book.