Efforts on to establish Sanskrit University in Himachal: Suresh Bhardwaj 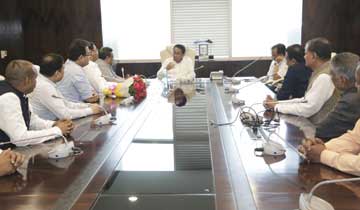 Shimla,
Education Minister Suresh Bhardwaj said that the state government was making all out efforts to open the first Sanskrit University in the state. He said that a committee would be constituted under the chairmanship of Principal Secretary, Education to identify a suitable land for setting up of the university while one more committee would be formed to finalize the curriculum.

He was presiding over a meeting with the heads of various educational institutes and teachers to discuss the formalities for setting up the proposed Sanskrit University.

The Education Minister said that the BJP had included the resolution to open Sanskrit University in its 'Drishti Patra' which has now been made as policy document by the present state government. He said that opening of Sanskrit University would go a long way in facilitating the research scholars and students of Sanskrit language within the state besides encouraging this language.